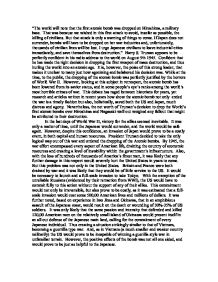 Politically this was also a good move by President Truman. It is likely that had he not decided to use the bomb, the blood of 500,000

"The world will note that the first atomic bomb was dropped on Hiroshima, a military base. That was because we wished in this first attack to avoid, insofar as possible, the killing of civilians. But that attack is only a warning of things to come. If Japan does not surrender, bombs will have to be dropped on her war industries and, unfortunately, thousands of civilian lives will be lost. I urge Japanese civilians to leave industrial cities immediately, and save themselves from destruction." Harry S. Truman appears to be perfectly confident in his radio address to the world on August 9th 1945. Confident that he has made the right decision in dropping the first weapon of mass destruction, and thus hurling the world into an atomic age. It is, however, the poise of this strong leader, that makes it unclear to many just how agonizing and belabored his decision was. While at the time, to the public, the dropping of the atomic bomb was perfectly justified by the horrors of World War II. However, looking at this subject in retrospect, the atomic bomb has been lowered from its savior status, and in some people's eye's ranks among the world's most horrible crimes of war. ...read more.

The emperor would employ more that 2.3 million well trained and well equip Japanese troops (a number 19 times greater than that killed in both the atomic blast), whose ultimate ending would likely be a proud death in battle, this figure of course does not include any civilian resistance and casualties. And while one could make the case that these 2.3 million men are combatants and therefore are considered expendable by the rules of warfare. However, is it not true that these combatants were likely drafted to war, and should be considered no less of a human or no less part of the war, than a civilian is. Also the use of conventional weapons, over Tokyo, killed more than 220,000 Japanese, and while this is not commendable it is much less that number than the killed in both of the atomic blasts. The economic strain was starting to take its toll on the Japanese, and if a war had continued, it was likely that starvation and poverty would be widespread among the public. Finally, an invasion of the mainland would most likely employ the aid from the Red Army. Japan would be divided across the middle, the North and South under two opposing forces. ...read more.

But these proven war crimes, as revealed in the Tokyo trials, did not stop at their treatment of the citizens of their captured countries. American POW (Prisoners Of War) were often not only executed but used in the Japanese experiments of Germ and Chemical warfare, with consequences far worse than the fall out of the Atomic bomb. The Atomic bombs stopped Japanese aggression dead in its tracks, hindering any thoughts of resuming an aggressive imperial stand in Asia. August 6th, 1945, a new chapter in the history books was written, and the start of the atomic age fell upon the earth. In the years to come, that one decision by one man would be scrutinized and reviewed over and over, only to find that any fall out that can be attributed to the blast that day in August are severely out weighed by their effectiveness in ending a horrible era in the world's history, World War II. What we don't know, however, is how the world would be different if we hadn't dropped the bomb, and what it all boils done to is strongly supported speculation. It is up to the individual to decide how Harry S. Truman will be remembered, for his actions and decision to drop the bomb. ...read more.