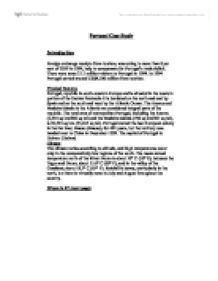 Portugal Case Study Introduction Foreign exchange receipts from tourism, amounting to more than 8 per cent of GDP in 1994, help to compensate for Portugal's trade deficit. There were some 21.7 million visitors to Portugal in 1994. In 1994 Portugal earned around US$4,100 million from tourism. Physical Features Portugal, republic in south-western Europe and is situated in the western portion of the Iberian Peninsula it is bordered on the north and east by Spain and on the south and west by the Atlantic Ocean. The Azores and Madeira Islands in the Atlantic are considered integral parts of the republic. The total area of metropolitan Portugal, including the Azores (2,335 sq km/902 sq mi) and the Madeira Islands (796 sq km/307 sq mi), is 92,345 sq km (35,655 sq mi). Portugal owned the last European colony in the Far East, Macau (Macao), for 442 years, but the territory was handed over to China in December 1999. ...read more.

recognized by the pope 1248-1279 Expulsion of the Moors from the Algarve completed in the reign of Alfonso III 1294 Commercial treaty signed with England 1340 Battle of the Salado River 1385 Portuguese throne secured by John I, beginning the House of Aviz. During his reign his son, Henry the Navigator, explored the African coast for an eastward route to the Indies 1386 Portugal and England allied permanently by the Treaty of Windsor 1480s Relations established with African Kongo kingdom (in present-day Angola). Bartolomeu Dias first to sail around southern tip of Africa 16th cent. Profitable trade in goods from South Asia opened-up by Vasco da Gama's first voyage to India. Goa, Malaysia, and Indonesia occupied by the Portuguese 1536 Inquisition introduced into Portugal, following Spain 1580 End of Aviz dynasty. Portugal annexed to the Spanish Habsburg monarchy, under Philip II of Spain, Philip I of Portugal 1640 Independence from Spain won. ...read more.

Junta established promising democracy. African territories given independence during 1974 and 1975 1986 Membership of the European Community 1991 Socialist Party leader M�rio Soares elected to second presidential term 1999 Macau, Portugal's last overseas territory, transferred to Chinese control. Ant�nio Guterres re-elected prime minister Travel info Portugal has about 68,732 km (42,708 mi) of paved roads and some 310 passenger cars per 1,000 people. The railway system has a total length of about 2,856 km (1,775 mi). Most of the tracks are wide gauge to accommodate shipments from Spain. The merchant navy comprises 326 vessels. Major seaports include Lisbon, Leix�es, Set�bal, and Funchal (Madeira). Transportes A�reos Portugueses (TAP), the national airline, provides domestic and international service. There are international airports at Portela (Lisbon), Pedras Rubras, Faro (Algarve), Santa Maria and Lages (Azores), and Funchal (Madeira). Approx. Cost According to the facts, one would spend about $680 on costs for a typical holiday in Portugal. This includes flight, souvenirs etc. Evaluation ...read more.