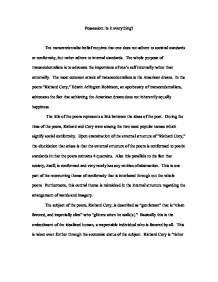 Possession: Is it everything?

This is one part of the reoccurring theme of conformity that is interlaced through out the whole poem. Furthermore, this central theme is mimicked in the internal structure regarding the arrangement of words and imagery. The subject of the poem, Richard Cory, is described as "gentleman" that is "clean favored, and imperially slim" who "glitters when he walk[s]." Basically this is the embodiment of the idealized human, a respectable individual who is favored by all. This is taken even further through the economic status of the subject. ...read more.

After going home Robert Cory "put[s] a bullet through his head." This signifies that one can have everything he wants, respect, money, and admiration, and not be happy with one's self. As a whole, "Richard Cory," by Edwin Arlington Robinson, is a representation of the realization the possession is not everything unless one has happiness which annuls the latter. Instances of social conformity are interlaced throughout the poem to give and support the transcendentalist mentality. The title of the poem, vivid imagery, and even the structure of the poem are parallel to this mentality. The last and closing argument for this mentality is achieved through the belief that personal possession equivocate to nothing when Richard Cory "put[s] a bullet through his head." ...read more.