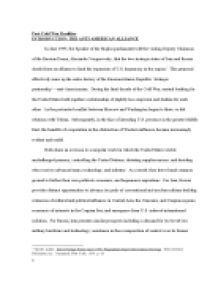 ﻿Post-Cold War Realities INTRODUCTION: THE ANTI-AMERICAN ALLIANCE In June 1995, the Speaker of the Majlis (parliament) told the visiting Deputy Chairman of the Russian Duma, Alexander Vengerovsky, that the two strategic states of Iran and Russia should form an alliance to limit the expansion of U.S. hegemony in the region.[1] This proposal effectively sums up the entire history of the Russian-Islamic Republic ?strategic partnership??anti-Americanism. During the final decade of the Cold War, mutual loathing for the United States held together a relationship of slightly less suspicion and disdain for each other. As the protracted conflict between Moscow and Washington began to thaw, so did relations with Tehran. Subsequently, in the face of intruding U.S. presence in the greater Middle East, the benefits of cooperation in the obstruction of Western influence became increasingly evident and useful. Both share an aversion to a unipolar world in which the United States wields unchallenged primacy, controlling the United Nations, dictating supplier unions, and deciding who receives advanced arms, technology, and industry. As a result, they have found common ground to further their own political, economic, and hegemonic aspirations. For Iran, Russia provides distinct opportunities to advance its goals of conventional and nuclear military buildup; extension of cultural and political influence in Central Asia, the Caucasus, and Caspian regions; economic oil interests in the Caspian Sea; and emergence from U.S. induced international isolation. For Russia, Iran presents similar prospects including a demand for its Soviet-era military hardware and technology; assistance in the re-imposition of control over its former sphere of influence; its own Caspian Sea oil and gas interests; and insulation from Western political and economic pressure. While both sides would prefer to dominate the regions on their own, their inability to individually block U.S. influence from making inroads has brought them together to present a stronger, more unified resistance. This paper will proceed to analyze how the theme of anti-Americanism is rooted in past and present Russian-Iranian relations and the implications that the current realities of this ?strategic partnership? hold for United States policy. ...read more.

The collapse of the social safety net and resulting social and economic despair then served to aggravate an already volatile situation. When it came time to point the finger at someone, most people immediately blamed those with whom they had always had some sort grievance?though previously kept under lock and key by Moscow.[29] Even so, Russia still considers the former Soviet republics that now make up the Commonwealth of Independent States (CIS) as its undisputed sphere of influence. However, it is not blind to the fact that it has, in many ways lost the ability to project control over the region. At least for economic reasons, ?Russia?s budget cannot sustain a further drain of resources in the direction of Central Asia.?[30] After seventy years of forced subordination to the Kremlin, many of the former republics, despite their Communist remnant leaders, are relishing their newfound independence. As a result, any overt imperialistic action by Moscow is seen through the lens of the Soviet legacy by wary eyes. Looking for help, Russia?s increasingly friendly trade relations with Iran presented the opportunity to collaborate once again. Due to Persian culture?s important ties with the predominantly Islamic majorities in many of these new states, Russia sees the opportunity to culturally contract Iran for its own influential benefit. Similar to Russia, Iran has nothing to gain from the re-emergence of a power struggle in the region. But by cooperating with Russia, it can also extend its own political and cultural influence, establishing economic ties in the process. The distinct lack of cultural and national identities provides Tehran, with its historical ties, a singular ability to take advantage of the situation and possibly further its long held belief in a ?great Iran? spreading into the larger Middle East. For many of these countries, Iran could represent a means to gaining alternatives to Moscow?s control. At the same time, Russia believes that it could use Iran as a conduit for indirectly influencing the region on uncooperative issues and as a means ...read more.