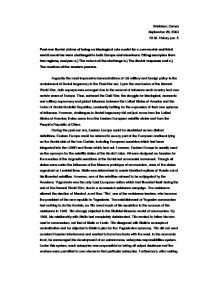 Post-war Soviet claims of being an ideological role model for a communist and third world countries were challenged in both Europe and elsewhere.

Shehtaaz Zaman September 28, 2003 IB SL History per. 5 Post-war Soviet claims of being an ideological role model for a communist and third world countries were challenged in both Europe and elsewhere. Citing examples from two regions, analyze: a.) The nature of the challenge b.) The Soviet response and c.) The reaction of the western powers. Arguably the most impressive demonstrations of US military and foreign policy is the containment of Soviet hegemony in the Post-War era. Upon the conclusion of the Second World War, both superpowers emerged due to the amount of influence each country had over certain areas of Europe. Thus, surfaced the Cold War, the struggle for ideological, economic and military supremacy and global influence between the United States of America and the Union of Soviet Socialist Republics, constantly battling for the expansion of their own spheres of influence. However, challenges to Soviet hegemony did not just come from the United States of America; it also came from the Eastern European satellite states and from the People's Republic of China. During the post-war era, Eastern Europe could be elucidated as two distinct definitions. Eastern Europe could be referred to as any part of the European continent lying on the Soviet side of the Iron Curtain, including European countries which had been integrated into the USSR and those which had not. ...read more.

Immediately, a conflict between ideologies is evident, as Mao believed in a rural-based revolution, while Lenin and the Soviets believed in an urban-based revolution. At the time when Marx wrote the Communist Manifesto, Europe had already experienced the Industrial revolution, and he predicted that the industrial workers would therefore lead the communist revolution. This doctrine was enthusiastically adopted by the Soviet Union. In Asia, however, the story was different. At the end of the Second World War, except for Japan, Australia and New Zealand, none of the developing countries had fully experience an industrial revolution. These countries therefore lacked an industrial proletariat to spearhead communist revolution. Mao Tze-Tung argued that the communist revolution in developing societies would have to be led by the peasants. These differences in approaches to bringing forth a proletarian revolution were also reflected in the domestic economic policies pursued by each of these countries. In the USSR, industrial development was assigned supremacy over all other sectors in the economy. In China, it was the agrarian revolution which was emphasized and pursued. "By application the laws of dialectical avarice to the Communist Party itself, Mao believed that the party was a ''unity of opposites'' between the leading proletarian Marxist-Leninist-Maoist line and party leadership on the one hand, and on the other, erroneous lines and thinking which ultimately reflect other class outlooks. ...read more.

In 1978, due to Western influence and its own decisions, China introduced 'Market Socialism', reducing the Communist Party's control over the economy. This marked the pinnacle of abandonment of the USSR on the PRC's part, and the emergence of a new China closely tied with the west through increasing levels of trade and investment. The collapse of the Soviet Union in 1991 also marked a turning point in Sino-Soviet relations. The Russian Federation which emerged out of the ashes of the USSR became increasingly preoccupied with domestic economic and political adjustment. It also marked the beginning of a new relationship between the PRC and the Russian Federation, vastly reducing the ideological hostility between the two countries. The short-term success of Yugoslavia was evident, as the country succeeded in carving out its own niche in the geopolitical spectrum of Eastern Europe. However, due to ethnic conflict within Yugoslavia led to the total collapse of the nation during the late 1990's in response to the collapse of the Soviet Union. Yugoslavia has ceased to exist in its former form, while the PRC has flourished, and is on its way to becoming an economic superpower. Both countries were successful to certain extent, as both were able to successfully employ their own form of totalitarian socialism differentiating from the Moscow model. The collapse of the East bloc and the emergence of a new China demonstrate the failure of the Moscow model and the Soviet's ability to contain these alternate forms of communism. ...read more.