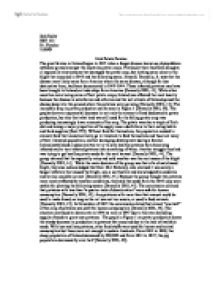 Jack Ruley HST 112 Dr. Fletcher 11/9/09 Irish Potato Famine The great famine in Ireland began in 1845 when a fungal disease known as phytophthora infestans spread amongst the countries potato crops. Previously there had been droughts or especially rainy seasons that damaged the potato crop, but nothing came close to the blight that occurred in 1845 and the following years. James S. Donnelly, Jr. says that the disease most likely came from America where the same disease, although far less destructive there, had been documented in 1843-1844. These infected potatoes may have been brought to Ireland on trade ships from America [Donnelly 2001, 41]. While other countries were losing some of their potato crops, Ireland was affected the most heavily because the disease is waterborne and airborne and the wet climate of Ireland spread the disease deep into the ground where the potatoes were growing [Donnelly 2001, 41]. ...read more.

1.5 million Irish traveled to the United States, 340,000 went to British North America, nearly 300,000 went to Great Britain and a few thousand sailed to Australia or other countries [Donnelly 2001, 178]. While these are incredibly high numbers of emigration, the amount of emigrants from Ireland were high before the potato famine even began. It was estimated that a decade before the famine struck, the Irish were coming to North America at a rate of 50,000 per year [Donnelly 2001, 178]. Figure 2 [Donnelly 2001, 170] shows the massive population change through 1841 to 1851 in Ireland. The majority of the Irish country lost over 25% of its population to a combination of starvation, disease, and emigration. The northern most parts of the country were affected the least though. The conditions of the ships and the lack of food on them was so bad that it is estimated that nearly 50,000 of the emigrants died en route or shortly after arriving in North America over the 10 year emigration spike [Donnelly 2001, 181]. ...read more.