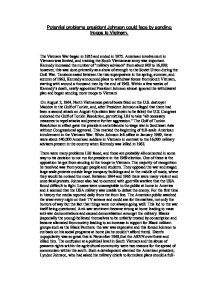 Potentialproblems president Johnson could face by sending troops to Vietnam.

Potential problems president Johnson could face by sending troops to Vietnam. The Vietnam War began in 1955 and ended in 1975. American involvement in Vietnam was limited, and training the South Vietnamese army was important. Kennedy increased the number of "military advisors" from about 800 to 16,000; however, this was done primarily as a show of strength to the Soviet Union during the Cold War. Tensions eased between the two superpowers in the spring, summer, and autumn of 1963, Kennedy announced plans to withdraw forces from South Vietnam, starting with around a thousand men by the end of 1963. Within a few weeks of Kennedy's death, newly appointed President Johnson almost ignored the withdrawal plan and began sending more troops to Vietnam. On August 2, 1964, North Vietnamese patrol boats fired on the U.S. destroyer Maddox in the Gulf of Tonkin, and, after President Johnson alleged that there had been a second attack on August 4 (a claim later shown to be false) ...read more.

Blacks (especially the young) believed themselves to be unfairly treated by conscription and became alienated from society leading to an increase in support for Black militant groups such as the Black Panthers. the war was expensive and this forced Johnson to cut back on his social programs at home (as he couldn't afford them). Diem's unpopularity was so great that in November 1963,that the ARVN overthrew and killed him. The confusion at a political level in South Vietnam and the abuse of peasants rights within the agricultural community were two reasons for the spread of communism within the south. Such a development alarmed the American president, Lyndon Johnson, who had asked his military chiefs to formulate plans should a full-scale war break out. The one proviso the chiefs-of-staff had was that America had to be seen as the victim rather than the aggressor. In August 1964, the Tongking Incident occurred when two American destroyers were attacked by North Vietnamese gunboats while they were in international waters. ...read more.

America had total control of the air. Planes could be used to back-up ground troops by using napalm. Defoliation chemicals were also used to destroy the jungle cover given to the Viet Cong along the Ho Chi Minh trail. Agent Orange killed large areas of jungle disguising this trail but those using it, simply moved further inland or further into Laos thus avoiding the defoliated areas. To hinder the supply of US troops, the Viet Cong blew up bridges, roads and destroyed canals. American front line troops were nicknamed "grunts". This is because every time they sat down, the straps on the heavy packs they were carrying tightened into their chests thus forcing out air in the lungs causing a sound like a grunt. The average age of a "grunt" was 19 and they knew that the land they operated in was littered with booby-traps. Each step they took in the jungle or in the long grass that was common in South Vietnam could result in serious injury. This had a devastating psychological effect on the conscripts. ...read more.