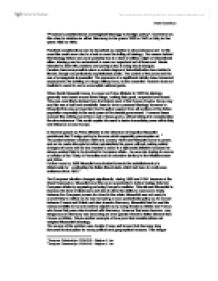 &quot;Practical considerations outweighed ideology in foreign policy&quot;. Comment on this view in relation to either Germany in the years 1933 to 1941 or Italy in the years 1922 to 1940.

"Practical considerations outweighed ideology in foreign policy". Comment on this view in relation to either Germany in the years 1933 to 1941 or Italy in the years 1922 to 1940. Practical considerations can be described as reaction to circumstances and in this case this could occur due to a lack or even the failing of ideology. The reason behind this ideology failure was most probably due to a lack of military might or international allies. Ideology can be understood to mean an organized set of ideas and ideals intended to deal with problems and perhaps also to bring about changes. Fascism becomes possible when a certain degree of industrialization has created a literate, though not particularly sophisticated public. The control of the press and the use of propaganda is essential. The presence of a significant middle class, increased employment, the building of a large military force, is also essential. Fascism does not hesitate to resort to war to accomplish national goals. When Benito Mussolini came to power as Prime Minister in 1922 his ideology generally was based around three things, making Italy great, respected and feared. ...read more.

Further more by 1925 Mussolini accelerated towards the establishment of a dictatorship by eradicating the Italian liberal state which had been in continuous existence since 1861.2 The European situation changed significantly during 1929 and 1934 because of the Great Depression. Mussolini saw this as an opportunity to further indulge Italy into European affairs by appearing as being Europe's mediator. This allowed Mussolini to increase the level of diplomacy and also to allow the ability to manoeuvre freely between the European powers involved in the crisis. Mussolini was not ready to commit Italy to neither as he was favouring a more protectionist policy so he moved between France and Britain and also towards Germany. Mussolini tried to use this manoeuvrability to try and achieve objectives by using threats to Britain and France who knew Italy were also involved with Germany. However that soon became very dangerous as Germany was becoming an even greater threat to Italian interest than France or Britain. This is another example of how practical considerations out weighed Mussolini's ideology. ...read more.

Furthermore the resources Mussolini used up for this war could not be made up in turn for the outbreak of the Second World War later on, which left Italy vulnerable to attack. This resulted in the Rome-Berlin Axis because Mussolini had to choose Germany because it simply could not keep up with Germany's speed of rearmament. This is what F.W.D. Deakin has termed as the 'Brutal Friendship' 3 Different Historians and analysts have arguments on reasoning behind Mussolini's policies and actions. DE Felice, who sees Fascism as a revolutionary phenomenon' which aimed at the 'mobilization of the masses and the creation of a new kind of man' claimed that this could not be accomplished by domestic policies so the Ethiopian War was a new drive and therefore a success. On the other hand Mack smith argues that the purpose of Mussolini's foreign policy was to bolster his prestige. Some historians remain unconvinced and believe that Mussolini's expansionism was genuine and equivalent to Hitler's pursuit of Lebensraum. 1 European Dictatorships 1918-1945 - Stephen J. Lee 2 European Dictatorships 1918-1945 - Stephen J. Lee 3 European Dictatorships 1918-1945 - Stephen J. Lee Faisal Choudhury ...read more.