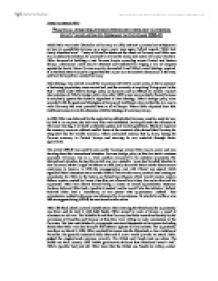 'PRACTICAL CONSIDERATIONS OUTWEIGHED IDEOLOGY IN FOREIGN POLICY' IN RELATION TO GERMANY IN THE YEARS 1933-41 Adolf Hitler was made Chancellor of Germany in 1933, and had a practical set of objectives on how to re-establish Germany as a super power once again. Bullock argued, 'Hitler had clearly identified aims'. Treaty of Versailles shattered the whole of Germany and Hitler saw it as a national humiliation, he promised to reverse the treaty and restore Germany's borders. Hitler dreamed of building a vast German Empire sprawling across Central and Eastern Europe. Lebensraum could only be obtained and sustained by waging a war of conquest against the Soviet Union: German security demanded it and Hitler's racial ideology required it. In his book Mein Kampf he argued that the Aryan race demanded Lebensraum in the East, and how he hoped for a united Germany. Nazi ideology was centred around the importance of belief in racial purity, in the importance of balancing population, resources and soil, and the necessity of acquiring 'living space' in the East - which made Hitler's foreign policy so dynamic and so difficult to combat. Taylor's interpretation of Hitler's foreign policy aims after 1933 is now seen as fatally flawed because it completely ignores the dynamic ingredient of Nazi ideology. Hitler's foreign policy aims accorded with the goals and ideologies of Germany's traditional rulers in that the aim was to make Germany the most powerful state in all of Europe. Where Hitler departed from this traditional scenario was his obsession with his ideology of racial supremacy. In 1936 Hitler was informed by the regime's top officials that Germany must be ready for war by 1940 it. In response, the Four-Year Plan was established. Developed under the direction of Hermann Goering, it set forth production quotas and market guidelines. Efforts to regiment the economy were not without conflict. Some of the economic elite desired that Germany be integrated into the world's economy. ...read more.

A J P Taylor presents an argument that Hitler ".did not make plans- for world conquest or anything else. He assumed that others would provide opportunities and that he would seize them." Taylor believes , that Hitler did not intend war to break out in September 1939, that he lacked any real plan for the conquest of Europe or the world, and that other governments played a crucial role in unleashing German expansion, 'are no longer regarded as valid'. Hitler used the threat of force to obtain Austria and a similar threat would give him the Sudetenland of Czechoslovakia. After the success of Anschluss his confidence grew, and wanted to build on creating a 'Greater Germany'. More than three-quarters of the population of the Sudetenland were ethnic Germans. Hitler stirred up nationalism to gain support of his ideas by claiming 'Germans are creators of God'. He used the argument of the Sudeten Germans' right to self-determination. The area also contained key industries and was vital to the protection of Czechoslovakia. Without this area heavily fortified Czechoslovakia could not hope to withstand German aggression. Sudetenland Germans, encouraged by the Nazis, began to denounce the Czech government. The Sudetenland was important due to giving German's their 'living space' - Lebensraum. Hitler once again was waiting for the opportunity to capitalise. Chamberlain continued to carry out an appeasement policy and also had sympathy for Hitler. He believed it was a reasonable transfer of Czechoslovakian land and viewed the land as being unimportant and that it was Hitler's 'last' territorial demand. Hitler's propaganda machine accused the Czech government of hideous crimes and warned of retribution. He ordered his generals to plan an invasion of Czechoslovakia. Chamberlain decided to intervene. This crisis led to the Munich Agreement in 1938, agreeing that all Czech troops in the Sudetenland would be replaced by German troops. Britain and France had shown was their own weakness and this weakness increased Hitler's appetite for even more territory. ...read more.

If USSR was conquered it would have been a major economic boost to Germany. I believe practical consideration was taking into account also aswell as ideology when planning to invade USSR. The raw materials gained from the USSR would have eased the domestic and economic problems. In Mein Kampf Hitler wrote about his vision that it would be a 'strategic and economic necessity' in conquering USSR. The economic pressure would be eased via gaining grain supply from the Ukraine aswell as having the oil reserves in Baku. He believed t would be a practical thing to do as using Slav labour to collect reserves from the large reservoir. Also in conquering USSR the practical consideration involved the expansion of Balkans and the Romanian oil fields. The invasion and defeat of France had a military logic. The ideology was to defeat France was essential in reversing the humiliation of 1918, and Hitler saw French responsible for them agreeing to Versailles. The opportunity was once again there for Hitler and once gain he took it with both hands. France was following a policy of appeasement and also economic difficulties aswell as bitter political divisions paved the way for Hitler to seize the initiative. Their long term strategy was once conquering France to dominate continental Europe. This could not be achieved without the destruction of France. At the end of 1941 Europe was 'scared' to an extent. Even though Hitler and Germany were eventually defeated Hitler met his foreign policy in what he got. In answering the question did practical considerations outweighed ideology in foreign policy, I believed both did play a part in achieving Hitler's foreign policy aims as both factors did compliment each other for example, Hitler's search for East expansion(Lebensraum) good not be done without a strong economy and strong military support. Also Hitler's talent of be being able to seize the opportunity was vital in securing foreign policy success. ?? ?? ?? ?? FAHIM TALUKDER U6SD ...read more.