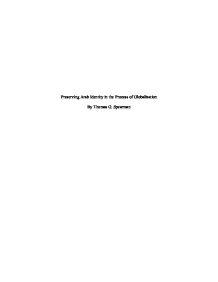 Preserving Arab Identity in the Process of Globalization

Preserving Arab Identity in the Process of Globalization By Thomas G. Spearman Raphael Patai examined Arab culture from many different perspectives in his book The Arab Mind, revealing much about their value systems, behaviors, beliefs, ethos, and ability to deal with westernization within the context of globalization. Its treatment was both objective and in-depth as it focused on the issues concerning Arab civilization. Can they co-exist with the West in a way that is functional without losing their cultural identity? Will the constants of their Islamic values suffer assimilation or outright disintegration from Western influences? This discussion will focus on these questions using Patai's insight and expertise. It will look at the challenges, both internal and external, faced by Arabs and how it might impact their culture and, on a larger scale, the process of globalization. The real key to understanding the region, as Patai clearly stated, is getting to know the Arabs the way they see themselves. The expression of the Arab collective mind reveals the complexity of their culture. By understanding the modalities of their basic personality, the real picture emerges, which is the starting point of Patai's book. Arabs, without question, make up a distinctive culture whose past, both Islamic and pre-Islamic, form the basis of their sociocultural aggregate. As far back as 800 BC Bedouin societies sprung up, thus forming the substratum of their varied, but homogenous, culture. ...read more.

One of the major problems is the "deterministic orientation" of the Arab mind-an attitude, according to Patai, that causes "considerable difficulties when it comes to industrialization and modernization."7 Arabs are inclined to abdicate responsibility due to an engendered passivity, for fate is the expression of God's will. To the Arab's way of thinking, preservation and continuation of the status quo are more important than innovation. Without the spirit of innovation, usually found in Western societies, the stifling affect of inertia fell over Arab culture, impeding their ability to cope with Western methodologies.8 From a historical perspective, Arab culture did not begin to wake up from its lethargy until Napoleon Bonaparte invaded and conquered Egypt. This was at the beginning of the industrial revolution, which had a tremendous impact on the Arabic world. As things progressed, cataclysmic changes, brought about by two world wars, changed the map of the Middle East. In the 1950s Arab nation-states emerged independent, but at an interdependent level with the West. The growing pains suffered by Arabs in their attempt at nation building and modernization was significant. But nothing was more damaging to the Arab mind, as Patai pointed out, than the loss to Israel in 1967 Arab-Israeli War. As a result of their failure, a deep scar was left on the Arab psyche; their honor was shamed. ...read more.

The central problem facing all Arab Muslims, as Patai stated in The Arab Mind, is: . . .how to find a new way of life-Islamic in character-which will be halfway between the East and the West and which will provide the internal stability necessary to enable Muslims to face their problems independently. The Arab World can borrow technology from the West but it must find the answers to its deeper problems within itself.15 In sum, there needs to be a cathartic synthesis between East and West that achieves balance without losing Arab identity. Many areas will need to be addressed, both internal and external, for this to happen. The Arab mindset, status of women, education and literacy, national, intranational, and international economies, traditionalism and rigidity verses progressiveness, language barriers, inter-Arab conflicts, corrupt political regimes and resistance to Westernization all figure into the dynamic. The process of integration within the realm of globalization will take decades. Forecasting the evolution of these divergent Arab nations will be difficult. Having said that, success can only be measured in terms of peace and prosperity within their own sphere-not from any Western evaluation. 1 Raphael Patai, The Arab Mind, New York, Hatherleigh Press:12-17. 2 Ibid, 32. 3 Ibid, 131. 4 Ibid, 151. 5 Ibid, 153. 6 Ibid. 7 Ibid, 163. 8 Ibid, 163-164. 9 Ibid, 373. 10 Ibid,199. 11 Ibid, 204. 12 Ibid, 209. 13 Ibid, 214. 14 Ibid, 231and 234. 15 Ibid, 266-267. 7 2 ...read more.