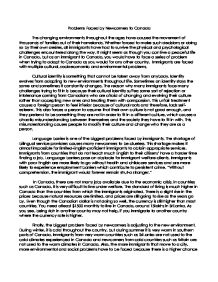 Problems Faced by newcomers to Canada

Problems Faced by Newcomers to Canada

The changing environments throughout the ages have caused the movement of thousands of families out of their homelands. Whether forced to make such decisions or doing so by their own desires, all immigrants have had to survive the physical and psychological challenges encountered along the way. It might seem as though you can live a peaceful life in Canada, but as an immigrant to Canada, you would have to face a series of problem when trying to adapt to Canada as you would for any other country.  Immigrants are faced with multiple cultural, socioeconomic and environmental problems.

Cultural identity is something that cannot be taken away from anybody. Identity evolves from adapting to new environments throughout life. Sometimes an identity stays the same and sometimes it constantly changes. The reason why many immigrants face many challenges trying to fit in is because their cultural identity suffers some sort of rejection or intolerance coming from Canadians who are afraid of changing and evolving their culture rather than accepting new ones and treating them with compassion. This unfair treatment causes a foreign person to feel inferior because of cultural roots and therefore, lack self-esteem. This also forces a person to assume that their own culture is not good enough, and they pretend to be something they are not in order to fit in a different culture, which causes a chaotic misunderstanding between themselves and the society they have to fit in with. This misunderstanding causes people to modify their culture and change who they are as a person.

Language barrier is one of the biggest problems faced by immigrants. The shortage of bilingual service providers causes many newcomers to be clueless. This shortage makes it almost impossible for limited-English-proficient immigrants to obtain appropriate services. Immigrants from countries that do not teach much English to their citizens’ have a harder time finding a job. Language barriers pose an obstacle for immigrant welfare clients. Immigrants with poor English are more likely to go without health and childcare services and are more likely to experience employment barriers which contribute to persistent crime. “Without comprehension, the immigrant would forever remain shut-a stranger.”

In Canada, there are not many jobs available due to the economic crisis. In countries such as Canada, it is very difficult to live under welfare. The standard of living is much higher in Canada than the countries from which the immigrants originated. There is a slight rise in the prices because natural resources are limited, and prices are still going to rise as the years go by. Even though the Canadian dollar is not doing so well, the currency is still higher than most countries. You need atleast $1500 monthly to live in Canada, around 15lakhs in SriLanka. As you see, being rich in another country may not help, if you immigrate to another country where the currency rate is higher.

Finally, the biggest problem faced by newcomers is adjusting to the new environment. During winter, it is cold throughout the country, but during summer it is very warm in southern parts of Canada. Immigrants from very warm countries such as SriLanka are not used to the cold climates experienced in Canada and newcomers from cold countries such as Britain are not used to the warm climates in Canada. Also, the more immigrants that move to a city, more environmental and social problems have to be faced because there is a higher chance for crimes to be committed and when there are many people in a place more energy is required to support them.

Immigrating to Canada may seem fun and solves many problems that the immigrant has faced in other countries; such as war or a communist government, but starting a new life is difficult. Economic insecurity, high levels of poverty that force families to live in poor neighbourhoods, experiences of inequality, modification of cultures, and a sense of powerlessness add much stress to the immigrant. “Nobody can go back and start a new beginning, but anyone can start today and make a new ending.”