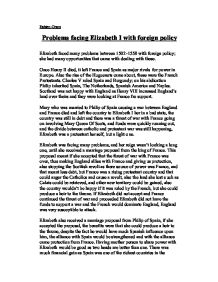 Fabien Oram Problems facing Elizabeth I with foreign policy Elizabeth faced many problems between 1502-1558 with foreign policy; she had many opportunities that came with dealing with these. Once Henry II died, it left France and Spain as major rivals for power in Europe. Also the rise of the Huguenots came about, these were the French Protestants. Charles V ruled Spain and Burgundy; on his abdication Philip inherited Spain, The Netherlands, Spanish America and Naples. Scotland was not happy with England as Henry VIII increased England's land over theirs and they were looking at France fro support. Mary who was married to Philip of Spain causing a war between England and France died and left the country to Elizabeth I her in a bad state, the country was still in debt and there was a threat of war with France going on involving Mary Queen Of Scots, and funds were quickly running out, and the divide between catholic and protestant war was still happening, Elizabeth was a protestant her self, but a light one. ...read more.

Elizabeth also received a marriage proposal from Philip of Spain, if she accepted the proposal, the benefits were that she could produce a heir to the throne, despite the fact he would have much Spanish influence upon him, the alliance with Spain would be strengthened and with the alliance came protection from France. Having another person to share power with Elizabeth would be good as two heads are better than one. There was much financial gain as Spain was one of the richest countries in the world. The country would be under male control, which would have been good for status, protestants would not be happy as Philip was very catholic. If she had declined the Catholics would not have been happy, as he was Catholic, the fact she was single status could be used as a weapon against her, there could've been a repeat of what happened with Mary and England might have been dragged into war. ...read more.

would make Elizabeth lose face at the start of her reign, but it would save resources and money, and give her time to focus on the many other problems England was facing, also improve relations with France and maintain power between France, Spain and England, England would appear of less of a threat to other countries though, which could provoke an invasion. I think her best option was to marry Philip of Spain, he was a huge power in Europe and his influence could've ended the war with France and put lots of money into England, also it was a very rich country and could've had been great for trade plus resources, but the protestants of England would've been very upset and not liked his catholic influence plus the French would feel insulted, but I don't see why she should marry someone who she is at war with. I believe Philip of Spain would have been her best choice. ...read more.