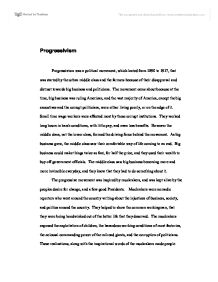 Progressivism was a political movement, which lasted from 1890 to 1917, that was started by the urban middle class and the farmers because of their disapproval and distrust towards big business and politicians.

Progressivism Progressivism was a political movement, which lasted from 1890 to 1917, that was started by the urban middle class and the farmers because of their disapproval and distrust towards big business and politicians. The movement came about because at the time, big business was ruling American, and the vast majority of America, except the big executives and the corrupt politicians, were either living poorly, or on the edge of it. Small time wage workers were affected most by these corrupt institutions. They worked long hours in harsh conditions, with little pay, and even less benefits. However the middle class, not the lower class, formed the driving force behind the movement. As big business grew, the middle class saw their comfortable way of life coming to an end. Big business could make things twice as fast, for half the price, and they used their wealth to buy off government officials. The middle class saw big business becoming more and more invincible everyday, and they knew that they had to do something about it. The progressive movement was inspired by muckrakers, and was kept alive by the peoples desire for change, and a few good Presidents. Muckrakers were nomadic reporters who went around the country writing about the injustices of business, society, and politics around the country. They helped to show the common workingman, that they were being hoodwinked out of the better life that they deserved. ...read more.

He had no objection to consolidation for the purpose of preventing damaging competition, but Roosevelt was concerned with equal treatment for all, and he was opposed to monopolies designed to stifle all competition. His attacks on these monopolies were the government's first effective regulation of big powerful business. Roosevelt also broke up big business by new legislation. In his annual message to Congress after his reelection, he called for drastic railroad regulation, which was granted in June of 1906 by Congress, which passed the Hepburn Act. This gave the Interstate Commerce Commission actual authority over the regulation of rates, extended the jurisdiction of the ICC, and broke up the railroads mixed interests in steamship lines and coal companies. Under Roosevelt, the spirit of Progressivism inspired the national government. Soon Congress had created a new Department of Commerce and Labor. One bureau of the new department was empowered to investigate the affairs of big business aggregations. In 1907 it discovered that the American Sugar Refining Company had defrauded the government out of a large sum in import duties. Further legal actions recovered more than $4 million and convicted several company officials. Then the Standard Oil Company of Indiana was indicted for receiving secret "discounts" on shipments through the Chicago and Alton Railroad. The fine imposed, amounted to $29,240,000 on 1,462 separate contracts. ...read more.

During Wilson's presidency, farmers and other workers were not forgotten. A federal loan act made credit available to farmers at low interest rates. Also the Seamen's Act of 1915, improved living and working conditions onboard ships. Soon after, in 1916, the Federal Workingman's Compensation Act authorized allowances to civil service employees for injuries received at work. Finally the Adamson Act, also of 1916, passed, and it established an eight-hour work day for railroad laborers. Wilson's and Roosevelt's political achievements as president earned them a firm place in American history as some of the nation's most important political reformers ever (Wilson's reforms probably would have continued too, if the U.S. had not had to enter World War I). Their reforms helped to create the U.S. we know and appreciate now. They helped to stop much of the corruption in the government, and they helped to create better lives for the common working class people of the country. Both presidents were instrumental in fighting the corrupt unfriendly monopolies of the country, and they set precedents, which continued to live on for many years, many of which still do. They left America a better place to work in, a better place to live in, and an easier place to rest in. Roosevelt and Wilson started a chain reaction in American that has continued since then and is still going. ...read more.