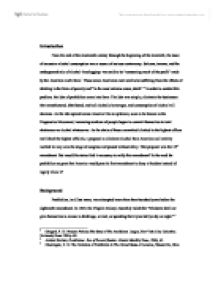 Prohibition. a proposal to eliminate alcohol from American soil entirely worked its way onto the stage of congress and passed without delay. That proposal was the 18th amendment. But would the states find it necessary to ratify this amendment?

Introduction From the end of the nineteenth century through the beginning of the twentieth, the issue of excessive alcohol consumption was a source of serious controversy. Saloons, taverns, and the underground sale of alcohol--bootlegging--was said to be "consuming much of the profit" made by the American work force.1 Those same Americans were said to be suffering from the affects of drinking in the form of poverty and "in the most extreme cases, death." 2 In order to combat this problem, the idea of prohibition came into form. The idea was simple; eliminate the businesses that manufactured, distributed, and sell alcoholic beverages, and consumption of alcohol will decrease. As the idea spread across America like an epidemic, soon to be known as the Progressive Movement, increasing numbers of people began to commit themselves to total abstinence-no alcohol whatsoever. As the chain of those committed climbed to the highest offices and linked the highest officials, a proposal to eliminate alcohol from American soil entirely worked its way onto the stage of congress and passed without delay. That proposal was the 18th amendment. But would the states find it necessary to ratify this amendment? Is the need for prohibition so great that America would pass its first amendment to deny a freedom instead of legally allow it? ...read more.

7 By 1913 the Anti-Saloon league had "transformed itself into an independent temperance agency." 8 Its structure had grown considerably; consisting of its own constituency, leaders, policies, and procedures. After nearly twenty years in the making, the Anti-Saloon league had the power to move quickly against saloons by tapping into a large body of voters and enforce political pressure in the favor of prohibition. It was this pressure that led to the eventual passing of several prohibition resolutions including the War Time Prohibition Act in April of 1917, forbidding the waste of grain used to make alcohol during World War I, the Eighteenth Amendment, proposed in December of 1917, which was to make an alcohol related activities, such as manufacture or consumption, unlawful, and the National Prohibition Act (Volstead Act) in October of 1919, which provided the means for the enforcement of prohibition and defined anything with an alcohol content of 0.05 and greater to be alcoholic. Viewpoints and Arguments It is the belief of those who support prohibition that alcohol has detrimental affects on society and is responsible for "19% of the divorces, 25% of the poverty, 25% of the insanity, 37% of the pauperism, 45% of child desertion, and 50% of the crime in this country"--as the Anti-saloon league has portrayed.9 Yet, do these statistics have any real factual basis, or are they merely misplaced facts used in an attempt to increase the case for prohibition? ...read more.

And although we are not yet able to prevent all individuals from acting unlawful or imposing on the freedom of another individual, we are able to create and enforce laws to punish the unruly and unlawful behaviors of any individual found by due process to be abusing his or her God given rights. More specifically, to deny the citizens of this nation the ability to govern themselves in the consumption of alcohol entirely, whether in moderation or excess, is not the solution-- especially when dealing with a substance of vast cultural importance to many immigrants and native born Americans, used as a means of relaxation by others, and used in religious ceremonies by others still. This method--the prohibition method-- goes against the very sense of freedom America was founded upon. Questions 1. How do you, the prohibitionists, plan to compensate for the amount of money lost due to the enforcement of prohibition? 2. What will substitute alcohol for religious and cultural purposes? 3. Assuming that prohibition is enacted, if the crime rate and illegal traffic of alcohol rises to levels greater than they were before prohibition, what is the next course of action? 4. Why not deal with the problem individuals abusing their freedom to drink instead of taking the right away from all Americans? Why do you consider prohibition the overall success? 5. ...read more.