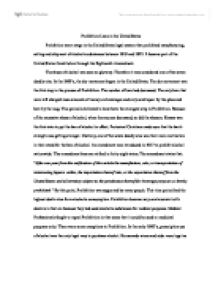 Prohibition Laws in the United States Prohibition was a stage in the United States legal system that prohibited manufacturing, selling and shipment of alcoholic substances between 1919 and 1933. It became part of the United States Constitution through the Eighteenth Amendment. The abuse of alcohol was seen as gluttony. Therefore it was considered one of the seven deadly sins. In the 1800's, the dry movement began in the United States. The dry movement was the first step in the process of Prohibition. The number of bars had decreased. The only bars that were left charged mass amounts of money on beverages and only sold liquor by the glass and beer by the mug. This period is believed to have been the strongest step in Prohibition. Because of the excessive abuse of alcohol, when the sources decreased, so did the abusers. Kansas was the first state to put the ban of alcohol in effect. ...read more.

Homemade wines and cider were legal as long as they originated from fruit. Also, communion in churches involving wine was not deemed illegal. Surrounding areas of the United States did not allow alcoholic substances either. Because of the availability of shipment of these alcoholic beverages to the United States, it would violate Prohibition and therefore, broke the law. However, personal use of alcohol was not an prohibited. As long as one was not selling or transporting alcohol, it was deemed legal to be in the household for personal use. The repeal of Prohibition was a big step in the United States legal system. Citizens became were getting tired of this Prohibition Law. In 1933, Franklin Roosevelt had incorporated the Cullen-Harrison Act which allowed the selling and manufacturing of a beer with 3.2 percent alcohol. This act had transformed to becoming a law. This had led to the repeal of the eighteenth amendment completely. ...read more.