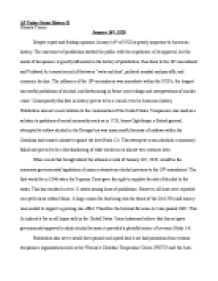 Prohibition - The Importance of January 16th 1920 to the US.

﻿AP Unites States History II Micaela Tracey January 16th, 1920 Despite repeal and feuding opinions, January 16th of 1920 is greatly important to American history. The enactment of prohibition startled the public with the expedience of its approval, but the moral of temperance is greatly influential in the history of prohibition. Reactions to the 18th amendment and Volstead Act caused social rift between ?wets and drys?, political scandal and pay offs, and economic decline. The influence of the 18th amendment was immediate within the 1920?s, the longest successful prohibition of alcohol, and forthcoming in future court rulings and interpretations of similar crisis?. Consequently this date in history proves to be a crucial event in American history. Prohibition was not a new solution to the communities of the United States. Temperance was used as a solution to problems of social immorality such as in 1733, James Oglethrope, a British general, attempted to outlaw alcohol in the Georgia but was unsuccessful because of outlaws within the Carolinas and caused colonist to ignore the law (Nishi 12). This attempt at a non-alcoholic community failed and proved to be a foreshadowing of what would occur almost two centuries later. Other events that brought about the ultimate events of January 16th, 1920, would be the numerous governmental legislation of minor restraints on alcohol previous to the 18th amendment. The first would be in 1846 when the Supreme Court gave the right to regulate the sale of alcohol to the states. ...read more.

Carroll was later seen driving down a regulary patrolled highway and Carroll was then pursued and pulled over. His car was then searched where offcials found illegal liquor in the back seat (Engdahl 195). Due to the Natoinal Prohibition Act, police officers were given the right to search private property with a warrent if they assumed reasoning to believe that was illgally trafficed subtances. The court rulled that search without a warrent was valid, however noted that this use of warrentless searching must be accopminied by probable belife that the vehical was in fact transporting illegal substances and that the vehicle could be moved a warrant could obtained. Results of this controversy were retrospect into the validity of using this search on cars but invalidity of using this type of search on homes (National Archives). Politically, many believed, in agreement with Robert Armstrong, that prohibition would bring about massive political reform. Tammany Hall was a large political machine that had a stranglehold on most of New York state. The Tammany Society used it?s headquarters of the saloon and a large tribute to the organized crime of bootlegging and the underground alcohol industry. Tammany Hall used it?s pull with the gangsters within the business of distributing alcohol to take over towns and gain support and create a political empire over New York City. This continued to become widespread and soon most major political figures would be gaining revenue from owning saloons and taking in information from various mobsters (SUNY). ...read more.

Milton Friedman, a Noble Prize winning economist, warns against the measures of drug control that will cause immense danger in the drug and innocent bystanders like those within the 1920?s did (Engdahl 176). Another problem formed from prohibition is shrinking dry counties seen today in the United States. Dry counties are cities or areas within the United States that forbid the sale of intoxicating liquors and are more commonly found in the southern region of the country. Due to the right determine alcohol laws given to states in the 21st amendment, some states do not make illegal the sale of alcohol, which could hinder revenue from liquor taxes, but make availability of alcohol fairly limited. However, studies have shown the restricting the access to alcohol causes consumer to drive farther to get wet counties. This then causes a more larger likelihood of alcohol related collisions and a higher rating of vehicle crashes and fines in dry counties. In conclusion, the importance of January 16th of 1920 is found throughout the history of the United States. Prohibition was the result of many previous attempts at temperance and was thought to be to solution to multiple troubles of the time. The legislation of the 18th amendment and Volstead Act caused immense influence with social and political morality and the cause of the Great Depression. Prohibition also lead to the inevitable repeal in the 21st amendment and even later acts of temperance and ?dry countries today. The 18th amendment and Volstead Act are pivotal to America?s movement of rights and development of crisis aversion within its past times. ...read more.