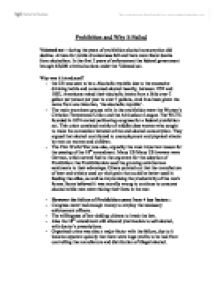 prohibtion and why it failed?

Prohibition and Why It Failed Volstead act - during the years of prohibition alcohol consumption did decline. Arrests for public drunkenness fell and there were fewer deaths from alcoholism. In the first 2 years of enforcement the federal government brought 65,000 criminal actions under the Volstead act. Why was it introduced? - the US was seen to be a Alcoholic republic due to the excessive drinking habits and consumed alcohol heavily, between 1792 and 1832, Americans raised their alcoholic intake from a little ...read more.

This union consisted mainly of middle class women who sought to make the connection between crime and alcohol consumption. They argued that alcohol contributed to unemployment and physical attacks by men on women and children. - The First World War was also, arguably the most important reason for the passing of the 18th amendment. Many US Many US brewers were German, which served fuel to the argument for the adoption of Prohibition: the Prohibitionists used the growing anti-German sentiments to their advantage. ...read more.

- However the failure of Prohibition came from 4 key factors : - Congress never had enough money to employ the necessary enforcement officers. - The willingness of law abiding citizens to break the law. - Also the 18th amendment still allowed pharmacists to sell alcohol, with doctor's prescriptions. - Organized crime was also a major factor with the failure, due to it became apparent quickly that there were huge profits to be had from controlling the manufacture and distribution of illegal alcohol. ...read more.