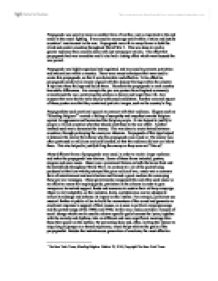 Propaganda was seen by many as another form of warfare, just as important to the end result as the actual fighting. It was used to encourage unity within a nation and justify countries' involvement in the war. Propaganda was rife in many forms in both the allied and central countries throughout World War 1. This was done to reach a greater audience than could be done with just newspaper articles. The effect that propaganda had was immediate and it also had a lasting effect which went beyond the war period. Propaganda was highly organised and regulated, and was used to promote patriotism and nationalism within a country. There were many techniques that were used to create this propaganda, so that it was believable and effective. To be effective, propaganda needs to be closely aligned with the deepest feelings within the country. It taps into these feelings and builds them. Therefore the propaganda in each country has subtle differences. For example the pro-war posters from England commonly romanticised the war, portraying the soldiers as heroic and larger than life. Any corpses that were shown were usually unfocused and distant. Another common aspect of these posters was that they contained patriotic images, such as the country's flag. ...read more.

By promoting ideas and, often, inviting the listener to sing along in groups as a shared experience, music helps achieve the goals of the propagandist. Besides the instantaneous generation of emotions, the most effective propaganda songs have qualities that make them memorable while relaying their messages in a fashion that is not too emotionally extreme to be accepted. An example of World War 1 propaganda in the form of music is an American song called Over There2. When this song was written America had just entered the war and had not yet experienced any of its horrors and was eager to march to war. However, anti-war sentiment was still strong among the American citizen. Over There capitalises on this excitement and encourages a sense of patriotism with listeners. George M. Cohan composed Over There, a march containing lyrics that stressed patriotism and a sense of national identity. It was one of the most successful American pro-war propaganda songs, enthusiastically inspiring the American spirit of confidence about the ability of their troops to end the war and return home safely. Since it was a march, it was easily sung and enjoyed, and proved to be an effective propaganda tool at the onset of the war for recruiting and homeland support. ...read more.

The impact of propaganda produced during the war lasted many years after and can still even be seen today. The hate between countries that was shaped during the war still resounds in some countries. Professor Vernon Kellogg asked "will it be any wonder if, after the war, the people of the world, when they recognise any human as a German, will shrink aside so that they may not touch him as he passes, or stoop for stones to drive him from their path?"5 This shows to what extent propaganda reached every corner of these countries. Propaganda was used as another form of warfare, by both allied and central countries. It was used to sway public opinion and generate patriotism and support for the war effort. Many different mediums were used to spread these messages, so that a larger audience could be reached. Propaganda was a very effective tool in creating momentum and support for the war, but it also induced a feeling of hate between countries. Whether for good or evil propaganda was an effective part of warfare that was used by all. 1 The New York Times, Bleeding Belgium, October 29, 1914, Copyright The New York Times. 2 George M. Cohan, Over There 3 http://www.diggerhistory.info/pages-posters/0-cat-index-posters.htm 4 L'Entente Cordiale 1915. 5 Vernon Kellogg ?? ?? ?? ?? ...read more.