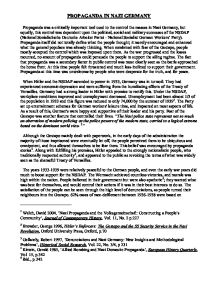 Propaganda was a critically important tool used to the control the masses in Nazi Germany, but equally, this control was dependent upon the political, social and military successes of the NSDAP

Propaganda itself did not define what the people thought; it merely encouraged and enhanced what the general populace was already thinking. When combined with fear of the Gestapo, people mostly as the battle approached the home front people felt threatened and less-inclined to support their government. Propaganda at this time was unwelcome by people who were desperate for the truth, and for peace.

When Hitler and the NSDAP ascended to power in 1933, Germany was in turmoil. They had experienced economic depression and were suffering from the humiliating effects of the Treaty of Versailles. Germany had a strong leader with promise to rectify this. Under the NSDAP, workplace conditions improved and unemployment decreased. Unemployment had been almost 1/3 of the population in 1933 and this figure was reduced to only 74,000 by the summer of 1939[1]. The Party set up entertainment schemes for German workers' leisure time, and impacted on most aspects of life. As a result of this, German's were happy and supportive of their leader and his party. Fear of the Gestapo was another feature that controlled their lives. “The Nazi police state represents not so much an aberration of modern policing as the police powers of the modern state, carried to a logical extreme based on the dominant world view.”

Although the Gestapo mainly dealt with paperwork, the majority of those imprisoned were eventually let off, the people perceived them to be ubiquitous and omnipotent, and thus allowed themselves to be fear them. This belief was encouraged by propaganda stories[2]. Along with fulfilling his promises, Hitler appealed to the strongly nationalistic people, who traditionally respected authority[3], and appeared to the public as revoking the terms of the shameful Treaty of Versailles.

The years 1933-1939 were relatively peaceful to the German people, and even the early war years did much to boost support for the NSDAP. The Wermacht achieved countless victories, and morale was high within the nation. People believed in their government but were also apathetic[4]; they wanted what was best for themselves and would control their actions if it was in their best interests to do so. The satisfaction of the people can be seen through the high level of denunciations, as people turned their neighbours into the Gestapo. 62% cases of race-defilement between 1936-1938 were based on denunciations[5], although their reasons were more personal than political with a ratio of 16:13 personal versus political[6].

During the early part of the regime, propaganda was widely used by the NSDAP. As they had only first received a majority in 1933, it was necessary for the new government to convince the population that they had been correct in voting for them, or that they should be supporting them[7]. Joseph Goebbels, Minister for Propaganda and National Enlightenment, aimed to unite the people under a common enemy, to raise support for the activities of the NSDAP and to help create the national community, or ‘Volksgemeinschaft’, that Hitler desired. Hitler was portrayed as a savior to the German people, and a cult of personality, which had already been prevalent in the early 1930’s, was conveyed to the nation using State resources and propaganda. Goebbels produced material comparing Hitler to Bismarck and, by the end of 1933, most towns had renamed their main square as ‘Adolf-Hitler-Platz’. The nationalism of the people was played on by propaganda, and national days, parades and speeches were set up to unite the country[8]. Propaganda was highly successful in creating the Cult of Hitler, which is one way in which it was successful. A woman recounts her seeing Hitler, saying it was one of the “…great moments I had just lived through.”

Several schemes were set up to benefit the German people, and encourage national participation. One pot, or ‘Eintopf’, urged people to sacrifice their meals once a month and donate what they had saved. Eintopf was described in propaganda as ‘The meal of sacrifice for the Reich.’ Another scheme, Winter Help, ‘Winterhilfe’, aided families suffering from the severe affects of unemployment. It collected food, money and clothing for those in need. From 1939 to 1943, the amount donated rose 955 million Reichsmarks. Two workplace schemes, ‘Strength through Joy’ and ‘Beauty of Labour’ were introduced to improve working conditions, and increase productivity of workers by organising their leisure time. ‘Strength through Joy’ was initially created to recompense workers after the loss of trade unions and poor wages. It dictated how leisure time should best be spent to increase productivity. A party official wrote of it “It is no exaggeration to say that for millions of German ‘Strength through Joy’ has made the world beautiful again and life worth living again.[9]”

Productivity also increased as hard work was rewarded[10], and poor workers were shamed[11]. ‘Beauty of Labour’ worked in conjunction with ‘Strength through Joy’ to improve working conditions. These working improvements were recognised in propaganda films like ‘Beauty of Work’[12]. Another scheme offered workers the opportunity to own their own People’s Car, ‘Volkswagen’. By saving 5 RM per week, they would soon be able to afford their own car[13]. While no cars were actually produced until after the war, the idea of owning their own car was enough to distract workers from the still unrecovered economy and restricted spending[14]. These schemes were widely publicised through propaganda, especially the cheap radio that was manufactured and distributed to the populace[15]. The radios had foreign stations blocked, so no outside ideas could leak in. During this early part of the war, propagandists were able to manipulate the many victories and had the populace marvelling at heroism and blind to any negative impacts of the war.

The pre-war years had seen Germany’s economy recover from a depression and the people become closer to a Volksgemeinschaft. The first few years of the war had numerous victories caused morale to be high within the nation. But in 1942, the Allies started their counter-attack directly onto German cities and the Wermacht had begun to lose more battles than it won. Up until this point, the war had been hosted in other countries and the people were able to disregard it as a direct threat to them, but now entire cities were being destroyed by Allied bombs and Allied planes were flying over the country virtually unmolested[16]. Morale had taken an irreparable dive. The people saw the government as unable to stop the attacks, and even the promise of retaliation could not lift the  as retaliation never came. Kergeltung, German retaliation, was seen by many to be the key to victory. It took place in June 1944 but the affects of the victory were short-lived and the Allied attack intensified[17]. Nothing could disguise the fact that the Allies were the superior force. Defeatism was rampant and fewer people supported the NSDAP for continuing the war; they wanted peace. In some parts of the Rhineland, towns raised white flags in surrender and removed anti-tank barriers to prevent their homes from becoming battle-scenes. The general view was that the Party was an obstacle for peace, rather than a pathway to victory.

During this part of the war, propaganda was focused on stalling the negative effects of the bombings and the defeats of the Wermacht. But the media did not have total control. The radio stations that usually transmitted to entire regions were now catering for both bombed and untouched areas. Propagandists were unsure of how much to tell the unaffected public, and how to use propaganda at this time. Towns that had been bombed turned on their radios with the expectation of hearing about what had happened, but were instead confronted with the usual entertainment and music. This enraged bombing victims, believing that the rest of the nation was ignoring their plight[18]. This demonstrated how propagandists might have control of what was broadcast, but they did not have control of the message. Goebbels instituted a frankness policy, instructing the media to share all the brutal details of what was happening. He hoped to satisfy the victims of attacks, and also unite those unaffected into further hatred of the allies. He based this theory on the notion that it was an essential in war-time “…that all parts of the community are bearing their share of the community.” But his policy backfired, and the people were gripped with paranoia and fear, and further disappointment that their government couldn’t stop the attacks. This feeling was common before this propaganda approach as 7.5 million people were homeless because of the bombings[19]. People were not as willing to accept the propaganda at this point in the war; they wanted the truth and the government would not offer it to them.

While propaganda did play a role in retaining power of the NSDAP, its role was to enhance the contentment the people were already experiencing.  This shows that propaganda was not entirely effective in controlling the people, and it was other factors that dictated whether they supported the Party or not. Success in the war was the main opiate of the masses as well as employment and bearable working conditions. As well as this, people desired to be part of the Volksgemeinschaft and feared the public shaming of those who did not contribute enough. Knowledge of these benefits that the Party gave them was spread through propaganda, though propaganda itself could not change the opinions of many in Nazi Germany, which can be seen through the Party’s lack of support when Germany began losing the war and citizens came face to face with the affects of war, in the form of the Allied bombing. Propaganda is an important tool to a government trying to gain and retain the support of its people, but it is also limited to what those people willing and able to accept. The Nazis demonstrated both how to use propaganda well, and how it can fail.