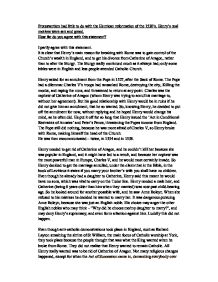 Protestantism had little to do with the Henrican reformation of the 1530(TM)s. Henry(TM)s real motives were sex and greed.

Protestantism had little to do with the Henrican reformation of the 1530's. Henry's real motives were sex and greed. How far do you agree with this statement? I partly agree with this statement. It is clear that Henry's main reason for breaking with Rome was to gain control of the Church's wealth in England, and to get his divorce from Catherine of Aragon, rather than to alter the liturgy. The liturgy really continued much as it always had; only some bibles were in English and less people attended Catholic Church. Henry asked for an annulment from the Pope in 1527, after the Sack of Rome. The Pope had a dilemma: Charles V's troops had ransacked Rome, destroying the city, Killing the monks, and raping the nuns, and threatened to return at any point. Charles was the nephew of Catherine of Aragon (whom Henry was trying to annul his marriage to, without her agreement). ...read more.

So Henry decided to get the marriage annulled, under the claim that in the Bible, in the book of Leviticus it states if you marry your brother's wife you shall have no children. Even though he already had a daughter to Catherine, Henry said this meant he would have no sons, which was vital to carry on the Tudor line. Henry needed a male heir, and Catherine (being 6 years older than him when they married) was now past child-bearing age. So he looked around for another possible wife, and he saw Anne Boleyn. When she refused to his mistress he decided he wanted to marry her. It was dangerous pursuing Anne Boleyn, because she was just an English noble. His choice may anger the other English nobles who may think - "Why did he choose me/my daughter to marry?", and may deny Henry's supremacy, and even form a faction against him. ...read more.

Also he would have so much power over the country, and would not have to answer to anyone. Therefore he would more power over his own country than any other European leader had over their country. From the evidence it is blatantly obvious that Henry only wanted to break with Rome because he was stubborn, and just wanted to be with Anne, because she refused to be his mistress, and he wanted what he couldn't have. Even thought he may have been sick of her by 1533, he was so stubborn that he did not back down, as he would loose face, and his social position in Europe would fall. In conclusion it is clear that Henry's motives for breaking with Rome and starting the Reformation were not to do with Protestantism, as he still remained Catholic, although it was a strange form of Catholicism. His motives were more focused on securing the succession of the Tudor Line, and getting what he wanted: Anne Boleyn, more money, land, prestige and power. ?? ?? ?? ?? ...read more.