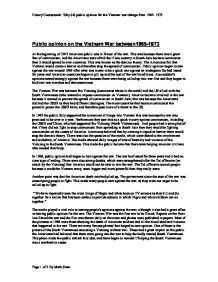 Public opinion on the Vietnam War between1965-1973 At the beginning of 1965 American public was in favour of the war. This was because there was a great fear of communism, and the Americans were afraid the if one country in South Asia became communist then it would spread to over countries. This was known as the domino theory. The Americans felt that Vietnam would create a barrier and therefore stop the spread of communism. Public opinion began to turn against the war around 1969 after what was meant to be a quick war against an inadequate foe had lasted for years and American casualties began to pill up and the cost of the war hired taxes. Also student's opinions turned strongly against the war because there were being called up into war first and they began to hold anti-war marches and demonstrations. The Vietnam War was between the Vietcong (communist rebels in the north) and the US allied with the South Vietnamese (who wanted to impose communism on Vietnam). America became involved in the war because it wanted to prevent the spread of communism in South Asia; this was because the Americans disliked the USSR as they had different ideologies. The more countries that became communist the potential power the USSR have, and therefore pose more of a threat to the US. ...read more.

The Vietnam War was the first war to be filmed. Reports on the front line filmed the war and the film was shown daily on the news and photos were published in papers. Most of the pictures in 1968 were those showing the death of American soldiers and all the blood shed and violence that happened in the war. There are many famous photos' that helped to turn opinion. One of these is the picture of the South Vietnamese executing a Vietcong without trail. These had a great impact on the public the Americans had believed that there were going into the war to help the badly treated South Vietnamese. This photo made the public rethink this idea, and there began to wonder if helping the South Vietnamese was a worthwhile cause. Another photo that had a great impact on the opinion of the war was the photo of a small South Vietnamese child. The child was one of many who were running from a village that the Americans had napalmed. The child was naked because the napalm had burnt off her clothes. It had also burned all of the skin off her back. This picture is the most famous picture taken in the war. It showed that the American army was not doing the good that it had set out to do. ...read more.

It also gave the army a chance to test weapons such as Napalm in a real life situation. Patriots were in favour of the war because they believed that if they did not fight communism in the east then they would be fighting it on the coasts of America. It was also a chance to show how great America was. In conclusion public turned because the American public began to believe that they would not be able to win the war. It had lasted far longer than had been estimated and America had lost many men. In addition the media convinced people that the war needed ending. The public by 1973 knew that the war needed to end, however despite the Tet offensive a government poll still showed that 55% of the public did not want to withdraw from Vietnam, but wanted to impose harsher policies to win the war quickly. So although public support said that America needed to get out of the war, it was split over how to withdraw. In addition the media played a deceive roll in turning people opinions against the war. Many people today remember the horrible photos of My Lin the child who's skin was burned off by American Napalm. These images horrified the public and made them believe that the war needed stopping. History Coursework: Why did public opinion for the Vietnam war change from 1965- 1973 Page 1 of 2 By Mark Stern ...read more.