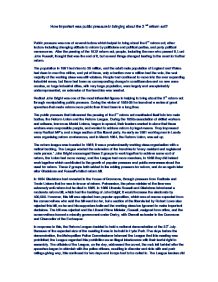 Public pressure was one of several factors which helped to bring about the 2nd reform act, other factors including changing attitude to reform by politicians and political parties, and party political manoeuvres.

How important was public pressure in bringing about the 2nd reform act? Public pressure was one of several factors which helped to bring about the 2nd reform act, other factors including changing attitude to reform by politicians and political parties, and party political manoeuvres. After the passing of the 1832 reform act, people, including the man who passed it, Lord John Russell, thought that was the end of it, but several things changed leading to the need for further reform. The population in 1861 had risen to 29 million, and the adult male population of England and Wales had risen to over five million, and yet of those, only a fraction over a million had the vote, the vast majority of the working class was still voteless. People had continued to move into the ever expanding industrial areas, but there had been no corresponding change in constituencies and no new ones creates, so huge industrial cities, with very large population, were largely and unexplainably underrepresented, an extension of the franchise was needed. Radical John Bright was one of the most influential figures in helping to bring about the 2nd reform act through manipulating public pressure. ...read more.

The bill was rejected and the Liberal Prime Minister, Russell, resigned from office, and the conservatives formed a minority government under Derby, with Disraeli as leader in the Commons and Chancellor of the Exchequer. In response to this, the Reform League decided to hold a national demonstration of the 23rd July. Because of the expected size of the meeting it was to be held in Hyde Park. Five days before the demonstration, the Metropolitan Police Commissioner informed the League that this meeting was prohibited; the League regarded this prohibition as an illegal interference with their lawful right to assembly. The officials of the League, on the day, addressed the crowd, the mob left behind after the speeches began to skirmish with the police officers, resulting in disorder and riots with and park railings giving way, this continued for two days and troops had to be called in. The League leaders did not desire this kind of violent action, they wanted to achieve their aims through legal means, but this performance nonetheless showed the average working class man's anger at being denied reform. In 1866 there was a short sharp economic crisis and several companies went bankrupt and there was widespread unemployment, bread became expensive following the poor harvest of 1865 and there was a sudden cholera epidemic which killed around 8000 people in London alone. ...read more.

originally intended, Disraeli had taken a gamble in passing the bill and the working class had ended up with more than they had originally bargained for. Public pressure, via the demonstrations of The Reform League, The Reform Union, and radical John bright, all played a vital part in bringing about the 2nd reform act. Other influences may have played a part too, the visit of Giuseppe Garibaldi, a man who played an instrumental role in the unification of Italy, publicised the idea of reform and his admirers in fact actually formed the Reform League. Politicians had begun to realize that some sort of reform was inevitable, Gladstone tried and failed to introduce some in 1866 due to political manoeuvres in opposing parties and his own. But the conservatives realized that they had a real change to gain power and a standing in the government, and although they originally had a fear of reform, the 2nd reform act was passed, the economic state perhaps acting as a catalyst again. But to the eventual dismay of Disraeli and the conservatives, due to the resignation of key Conservatives and Liberal amendments, Disraeli ended up with a Reform Bill which was far more drastic then he had ever originally planned to install. ...read more.