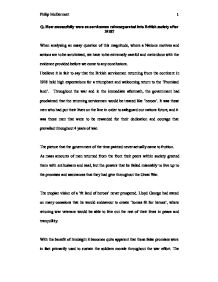 Q. How successfully were ex-servicemenreincorporated into British society after 1918?

Q. How successfully were ex-servicemen reincorporated into British society after 1918? When analysing an essay question of this magnitude, where a Nations motives and actions are to be scrutinized, we have to be extremely careful and meticulous with the evidence provided before we come to any conclusions. I believe it is fair to say that the British servicemen returning from the continent in 1918 held high expectations for a triumphant and welcoming return to the 'Promised land'. Throughout the war and in the immediate aftermath, the government had proclaimed that the returning servicemen would be treated like 'heroes'. It was these men who had put their lives on the line in order to safeguard our nations future, and it was these men that were to be rewarded for their dedication and courage that prevailed throughout 4 years of war. The picture that the government of the time painted never actually came to fruition. As mass amounts of men returned from the front their peers within society greeted them with enthusiasm and zeal, but the powers that be failed miserably to live up to the promises and assurances that they had give throughout the Great War. ...read more.

The level of financial assistance that the government provided was extremely low. The introduction of the pension was designed only to keep a man from destitution, and it failed to make provisions for his dependants. Even the most severely disabled soldiers would receive below the minimum need for survival. In any given year as many as 2,000 badly disabled war veterans depended on sheltered workshops for their daily bread. To further emphasise the government's naivety and ignorance toward this matter, when the 1st minister for pensions was asked the reasons why the government refused to grant full pensions to those men whose disabilities were aggravated by military service, he replied that some of the troops were, "Veritable weeds." (1) Obviously this created uproar, not only among the ex-servicemen to which he was addressing, but also amongst an entire nation who were eternally grateful for everything that the soldiers had done to safeguard their futures. For many of the disabled ex-servicemen the only way they could survive was if they found some form of paid employment. This again would prove most difficult as very few entrepreneurs were in favour of employing disfigured untrained ex-servicemen. ...read more.