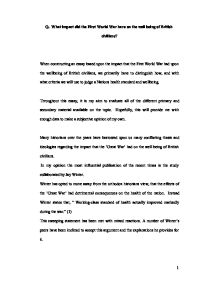 Q. What impact did the First World War have on the well being ofBritish civilians

Q. What impact did the First World War have on the well being of British civilians? When constructing an essay based upon the impact that the First World War had upon the wellbeing of British civilians, we primarily have to distinguish how, and with what criteria we will use to judge a Nations health standard and wellbeing. Throughout this essay, it is my aim to evaluate all of the different primary and secondary material available on the topic. Hopefully, this will provide me with enough data to make a subjective opinion of my own. Many historians over the years have bestowed upon us many conflicting thesis and ideologies regarding the impact that the 'Great War' had on the well being of British civilians. In my opinion the most influential publication of the recent times is the study collaborated by Jay Winter. Winter has opted to move away from the orthodox historians view, that the effects of the 'Great War' had detrimental consequences on the health of the nation. Instead Winter states that, " Working-class standard of health actually improved markedly during the war." (1) This sweeping statement has been met with mixed reactions. ...read more.

In balance, the actual answer probably lies somewhere in between both viewpoints. It is viable that a reduction in childbirths will aid such figures; also for those women who did fall pregnant, improved nutritional levels will play a factor in a trouble free pregnancy. As I continue to investigate mortality rates as a method to distinguish the development of the wellbeing of British civilians. George Newan comments that, "Infant mortality rate is the most sensitive and subtle index of all measures of social welfare." (6) This comment indicates that fluctuations in the frequency of infant deaths will echo the physical state of society. If we are to look closely at the data, it becomes apparent that infant mortality rates decline significantly during the war years. Specific figures show that the mortality rates of infants between 2-3 months fell by 19% between 1913 and 1918. Winter is of the opinion that this evidence, " Presents the most clear-cut indication of the surprisingly favourable effects of war conditions on the survival chances of the civilian population of the country." (7) Numerous historians have attempted to discredit this theory. Thomas McKeown has argued that, " The improved quality of the milk supply was the main reason for the reduction of deaths." ...read more.