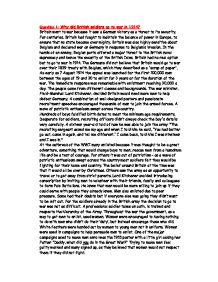 Question 1: Why did British soldiers go to war in 1914? Britain went to war because it saw a German victory as a threat to its security. For centuries, Britain had fought to maintain the balance of power in Europe, to ensure that no state became over mighty. Britain was also highly sensitive about Belgium and declared war on Germany in response to Belgium's invasion. In the hands of an enemy, Belgian ports offered a major threat to the British naval supremacy and hence the security of the British Isles. Britain had no real option but to go to war in 1914. The Germans did not believe that Britain would go to war over their 1839 treaty with Belgium, which they described as a 'scrap of paper'. As early as 7 August 1914 the appeal was launched for the first 100,000 men between the ages of 19 and 30 to enlist for 3 years or for the duration of the war. The immediate response was remarkable with enlistment reaching 30,000 a day. The people came from different classes and backgrounds. The war minister, Field-Marshall Lord Kitchener, decided Britain would need more men to help defeat Germany. ...read more.

White feathers were handed out by women to young men not in uniform. Women were used in campaigns to help persuade men to enlist. One of the major campaigns used to make men enrol was the 1915 poster with a little girl asking her Father "Daddy, what did you do in the Great War?" Trying to make men feel guilty worked and many signed up, as they believed that women would not respect them if they did not fight. Question 2: Why was there a stalemate during the First World War on the Western front? The Western Front was ground to a halt by the end of 1914 due to a number of reasons. The main reason for this, however, was the failure of the Shlieffen Plan. This plan was to fight a war on two fronts; first Germany would concentrate forces against France, which would knock it out in six weeks and then move soldiers across onto the Eastern front and fight the Russians, whom they expected to take a long time to mobilise. The Germans marched to invade France, and this could only be done by attacking through neutral Belgium. The Belgians heroically resisted and although they were crushed by the German advance, they slowed them down and the Germans did not reach Paris in 6 weeks. ...read more.

The Russian communist revolution also had a big impact on creating stalemate on the western front, in 1917 the Russians gave up there war on Germany due to the new leadership under Lenin, this know meant that the Germans after losing some ground in the eastern front were able to bring back German troops to help reinforce the western front causing more stalemate. First of all, enormous bombardments preceded infantry charges in which literally thousand of men ran, or sometimes even walked, across open ground towards enemy defences, often carrying a heavy pack only with a single shot rifle and grenades. As they reached the enemy, they were held up by the barbed wire, as they tried to find their way through it, they were shot down in their thousands by machine guns. Cannons were invented that could fire ten rounds a minute at a range of about ten miles. At the Battle of the Somme, The Germans were supposed to make up ground by having strong forces held at high ground. Both Britain and Germany sent in several hundred thousand troops, who were supposed to deliver a devastating bombardment over a wide front. It meant that in the centre of the attack, his cavalry along with assaulting infantry - could drive through the gap free from interference by the enemy fire from the flanks. ...read more.