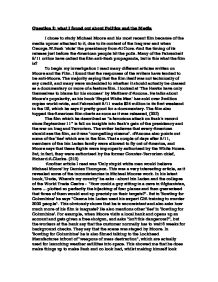 Question 2: what I found out aboutPolitics and the Media

Question 2: what I found out about Politics and the Media I chose to study Michael Moore and his most recent film because of the media uproar attached to it, due to its content of the Iraq war and when George.W.Bush 'stole' the presidency from Al Gore. And the timing of its release just before the American people hit the polls. Many of the Fahrenheit 9/11 critics have called the film anti-Bush propaganda, but is this what the film is? To begin my investigation I read many different articles written on Moore and the Film. I found that the responses of the writers have tended to be anti-Moore. The majority saying that the film itself was not technically of any credit, and many were undecided to whether it should actually be classed as a documentary or more of a feature film. I looked at 'The Hawks have only themselves to blame for his success' by Matthew d'Ancona. He talks about Moore's popularity, as his book 'Stupid White Men' has sold over 3million copies world-wide, and Fahrenheit 9/11 made $24 million in its first weekend in the US, which he says it pretty good for a documentary. ...read more.

For example, when Moore visits a local bank and opens up an account and gets given a free shotgun, and asks "isn't this dangerous?", but the workers at the bank say that the customer normally has to wait 6 weeks for background checks. They say that the scene was staged by Moore. In 'Bowling for Columbine' he is also filmed talking to the Lockheed Manufactures infront of "weapons of mass destruction", which are actually used for launching weather satillites into space. This showed me that he does make things up to make Bush and co look bad, whilst making himself look good. These 'lies' were in Bowling for Columbine', but there is no reasons to suggest that they couldn't be any 'lies' in F9/11. (563) From looking at some websites, I also found that there were more anti-Moore websites than pro-Moore websites. In most of the anti-Moore websites he is shown as a fat man wearing a baseball cap who tells lies. These websites were of a similar view to the newspaper articles I had read. ...read more.

Moore himself said that the film was not meant to be fair. The film appealed to the Liberals and the Left of America, whereas caused an outrage in the Right. People already faithful to Bush didn't believe the film and are openly anti-Moore like many of the articles and comments I have found. Bush and the Admisistration have condemed the film as a lie, have seem to have facts to prove it. I found out that that Moore probably has lied in the making of his films, and he has many inconsistencies in his books and his films. But even though he may not have been totally honest, he still his extremly popular. His critics say that people will believe him because hes a funny average guy. The critics say that Moore has helped Bush, unknowingly on Moores part, to gain publicity and votes. It seems that the more Moore attacks Bush, the higher Bush's ratings go up. So there has been links made between Moore and Bush, as Moore has been living lavishly of late, leaving people to think that there might be more of a connection than people think. ...read more.