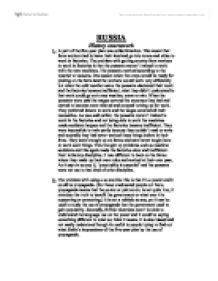 Questions based on Russia and her Five-year plans.

RUSSIA History coursework 1. A part of the five-year plan was collectivisation. This meant that farm workers had to leave their land and go into towns and cities to work in factories. The problem with getting country farm workers to work in factories is that the peasants weren't trained to work with the new machines. The peasants worked according to the weather or seasons. One season when the crops would be ready for picking on the farm land the workers would work very efficiently but when the cold weather came the peasants slackened their work and the factories became inefficient, what they didn't understand is that work could go on in any weather; snow or rain. When the peasants were paid the wages covered the expenses they had and started to become more relaxed and stopped turning up for work. They preferred leisure to work and the wages covered all their necessities. As was said earlier, the peasants weren't trained to work in the factories and not being able to work the machines made accidents happen and the factories became inefficient. They were impossible to train partly because they couldn't read or write and secondly they had never worked these things before in their lives. They were brought up on farms and were never taught how to work such things. ...read more.

She is saying that the workers were happy with the conditions and what they were doing. She says, 'it was poor conditions but we were happy people.' I have read a source once before which was another worker working on the same thing, the Moscow Metro system. They both say the same things. They say that they were happy to know that they were helping out. This gets me thinking that even these people could be set up to say stuff to get more peasants to work and join. The way they say the exact same things makes it unreliable. On the other side, it could be true because they each say that they are happy to help so they are all thinking the same thing. This source is hard to decide weather it could be useful or not but I think it could be a reliable source because of background knowledge and the facts out in front of me in the source. Next source D, Its said in my answer to question 2 what I think this is. It's a poster and in that case it could be set up, a peace of propaganda to show that Stalin is backing the five-year plan and turning away the church, rich people, etc. ...read more.

In source G it says they made tanks and aircraft and oil production increased, this could prepare Russia for war and they were capable of fighting a war with the resources they had. It says this was done in 1930 so due to my background knowledge they turned the Second World War around. They took out a lot of the German troops and really they won the war for Britain. The people of Russia became a lot happier and 'there seemed to be a sense of excitement and achievement' which is said in source H. This would prepare the men for war because they felt they could help their country. The women after working in the factories were capable of supplying artillery and guns for the war whilst the men were out. It tested and trained the people for war without using military training. In source F it talks about a man who had freedom to choose to change his job. Again they would want to fight for that freedom. People liked Stalin by now for what he had done to make their lives better and building up the country so he would be a strong leader and people would trust him in the time of war. This is shown in source B and D. Source C is an example again of good spirits and sense of achievement. In war this would make people fight because they had something to loose. The five-year plan brought people together. ...read more.