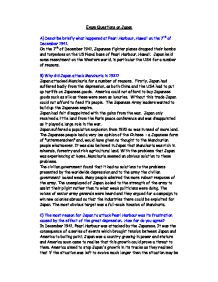 Exam Questions on Japan A) Describe briefly what happened at Pearl Harbour, Hawaii on the 7th of December 1941. On the 7th of December 1941, Japanese fighter planes dropped their bombs and torpedoes on the US Naval base of Pearl Harbour, Hawaii. Japan held some resentment on the Western world, in particular the USA for a number of reasons. B) Why did Japan attack Manchuria in 1931? Japan attacked Manchuria for a number of reasons. Firstly, Japan had suffered badly from the depression, as both China and the USA had to put up tariffs on Japanese goods. America could not afford to buy Japanese goods such as silk as these were seen as luxuries. Without this trade Japan could not afford to feed it's people. The Japanese Army leaders wanted to build up the Japanese empire. Japan had felt disappointed with the gains from the war. Japan only received a little land from the Paris peace conference and was disappointed as it played a large role in the war. ...read more.

C) The most reason for Japan to attack Pearl Harbour was its frustration caused by the effect of the great depression. How far do you agree? In December 1941, Pearl Harbour was attacked by the Japanese. It was the consequence of a series of events which brought tension between Japan and America to boiling point. Japan was a country growing in power and stature and America soon came to realise that this growth could prove a threat to them. America aimed to stop Japan's growth in its tracks as they realised that if the situation was left to evolve much longer then the situation may be out of their control. However, it can be argued that by not seriously dealing with this threat until the 1940's, America had left things too late and faced an opponent who would not back down. Japan relied greatly on America for immigration, due to the fast growth of the Japanese population. She still wanted to expand further, and at the time, the best option was to increase her trade links overseas. ...read more.

By doing this he hoped to halt their expansion. He also decided that a massive American Naval Expansion was in order. By doing this he hoped that Japan would fear America because the American Navy was a major strength in the Pacific Region. He hoped to threaten Japan into ending her aggression. By doing this Roosevelt thought that he would stop the threat of war from Japan for a while but this backfired on him in December 1941 when the Japanese attacked Pearl Harbour. I believe that Japan had three main reasons to attack Pearl harbour; the first is a long-term effect, because of their lack of raw materials. The second is a medium term effect and this is the Wall Street Crash and the great depression. The final reason for Japan to attack Pearl Harbour is that In the end Japan was driven to war by the fact that the military had control of the country. The army thought that an attack on Pearl Harbour would prove vital if they were to become equally as powerful as America and have a fighting chance in the war which had seemed inevitable for a long time. ...read more.