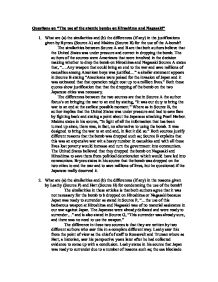 Questions on &quot;The use of the atomic bombs on Hiroshima and Nagasaki&quot;.

Questions on "The use of the atomic bombs on Hiroshima and Nagasaki" 1. What are (a) the similarities and (b) the differences (if any) in the justifications given by Byrnes (Source A) and Makins (Source B) for the use of the A-bomb? The similarities between Source A and B are that both authors believe that the United States was under pressure and correct in dropping the bomb. The authors of the sources were Americans that were involved in the decision making whether to drop the bomb on Hiroshima and Nagasaki Source A states that, "....Any weapon that could bring an end to the war and save millions of casualties among American boys was justified..." a similar statement appears in Source B stating "Americans were poised for the invasion of Japan and it was estimated that that operation might cost up to a million lives." Both these quotes show justification that that the dropping of the bomb on the two Japanese cities was necessary. The differences between the two sources are that in Source A the author focus's on bringing the war to an end by stating, "It was our duty to bring the war to an end at the earliest possible moment." ...read more.

The difference in these two sources is that they are written by two different authors who saw this in a complete different way. Leahy saw this from the point of view as the chief of staff to Roosevelt and Truman where as Hart, a historian, saw his perspective years later after he had collected evidence to come up with a conclusion. Leahy states in his source that Japan was ready to surrender due to a number of reasons such as; the sea blockade that the United States had placed in the east, the starvation that had overcome due to war, and also the bombing of regular weapons in the country but scientists wanted to test the Atomic bomb. Hart as a historian states, "But president Truman and most of his chief advisors were now as intent on using the bomb to accelerate Japan's collapse as Stalin was on entering the war against Japan before it ended, in order to gain advantageous position in the Far East." The United States wanted to make sure that Russia did not claim any "spoils" from the war that were to be gained in the Far East. ...read more.

Source G was later written by Hart who was a historian; he was in no way involved with the government and stated his perspective from viewing different sources that were used as evidence. Both Makins and Brynes mention in their articles that the bomb was dropped on Japan to save lives and to end the war in a more effective way. Sources A & B have a biased point of view because of the scenario that they are in, being that both authors were involved with the United States government at the time, and also understanding the issue at first hand. Makins and Brynes know the motivations that the United States government had in dropping the bomb such as keeping Russia away from Far East. Hart on the other hand looks back and states that a strategic reason would have been more important. Also he believes that there was no need to drop the bomb on Japan because they were ready to surrender. In his article he states, "This surrender was already sure..." making this not a personal statement. Hart has the advantage of looking at two biased views and coming up with an objective that suits the situation. ...read more.