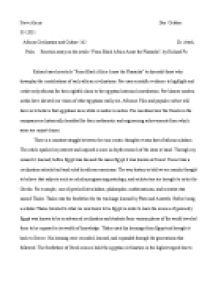 Reaction essay on the article From Black Africa Arose the Pharaohs, by Richard Po

﻿Steve Alexis Due: October 31st,2011 African Civilization and Culture 142 Dr. Attah-Poku Reaction essay on the article ?From Black Africa Arose the Pharaohs?, by Richard Po Richard uses his article ?From Black Africa Arose the Pharaohs? to discredit those who downplay the contributions of early african civilizations. Poe uses scientific evidence to highlight and credit early africans for their rightful claim to the egyptian historical contribution. Poe blames modern media have skewed our vision of what egyptians really are, Africans. Film and popular culture will have us to believe that egyptians were white or arabic in nature. Poe mentions how the Greeks in the europeans are historically heralded for their mathematic and engineering achievements from which some are unjust claims. ...read more.

Egypt was known to be an advanced civilization and students from various places of the world traveled there to be exposed to its wealth of knowledge. Thales used his learnings from Egypt and brought it back to Greece. His learning were recorded, learned, and expanded through the generations that followed. The forefathers of Greek science hold the egyptian civilization in the highest regard due to their many advances. It is clear that Thales has recorded his trips to Egypt and accredited them to his advanced understand of his sciences. This alone traces the beginning of the Greek understanding of mathematics to be a byproduct of Egyptian teachings. Egypt's contributions to this day cannot be denied. ...read more.

The world envisions africans as uncivilized and simple tribes while euro centric writers paint the greeks and the europeans as world scholars. Movie scenes show vivid images of dark skinned men or savages in jungles with loin clothes and basic dialects used to imitate language for african cultures and the greeks and europeans are seen adored in the finest white fabrics and in the most lavish architectural spaces. Lets be honest this is the image that millions upon millions of children are raised to believe across the world, myself included. Richard brings out the truth and shows us how the african civilization has been for lack of better term been taken for granted. Its rich history and ancestry has not just been contributions from its rich lands but also its contributions from its rich minds of the worlds first advanced civilization. ...read more.