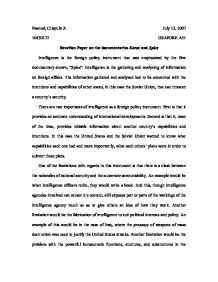 Pascual, Crispulo Jr. July 13, 2007 10430172 USAFORE A51 Reaction Paper on the documentaries Korea and Spies Intelligence is the foreign policy instrument that was emphasized by the first documentary shown, "Spies". Intelligence is the gathering and analyzing of information on foreign affairs. The information gathered and analyzed had to be concerned with the intentions and capabilities of other states, in this case the Soviet Union, that can threaten a country's security. There are two importaces of intelligence as a foreign policy instrument. First is that it provides an accurate understanding of international developments. Second is that it, most of the time, provides reliable information about another country's capabilities and intentions. In this case the United States and the Soviet Union wanted to know what capabilities each one had and more importantly, what each others' plans were in order to subvert these plans. One of the limitations with regards to this instrument is that there is a clash between the rationales of national security and the autocratic accountability. An example would be when intelligence officers retire, they would write a book. ...read more.

It is undoubtable that the United States has the ability to influence any country, in whatever way, whether cultural, social, or political. But in these cases I don't think the instruments were effective in advancing American values abroad. The United States has no apparent positive influence on the former Soviet Union nor Korea (at least North Korea) with regards to the American values resulting from these incidents concerning espionage and the use of force. These events have, in fact, been regarded by the states involved as a stigma, considering the number of casualties and the trauma that it has caused not only the citizens of the receiving state, but also the families of those who fought for the United States. In the case of intelligence, the casualties were mostly in the hands of the KGB, so the United States really wasn't at fault there-just taking into consideration the deaths and the trauma it caused the families, not the situation as a whole. I really don't think there was really any other way to undertake those things that had happened, but I think that before employing any of these instruments, due thought and precise calculations should be done in order to avoid disasters, such as the Korean War. ...read more.