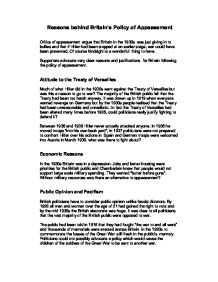 Reasons behind Britains Policy of Appeasement in the 1930s

Reasons behind Britain's Policy of Appeasement Critics of appeasement argue that Britain in the 1930s was just giving in to bullies and that if Hitler had been stopped at an earlier stage, war could have been prevented. Of course hindsight is a wonderful thing to have. Supporters advocate very clear reasons and justifications for Britain following the policy of appeasement. Attitude to the Treaty of Versailles Much of what Hitler did in the 1930s went against the Treaty of Versailles but was this a reason to go to war? The majority of the British public felt that the Treaty had been too harsh anyway. It was drawn up in 1919 when everyone wanted revenge on Germany but by the 1930s people realised that the Treaty had been unreasonable and unrealistic. In fact the Treaty of Versailles had been altered many times before 1936, could politicians really justify fighting to defend it? Between 1936 and 1938 Hitler never actually attacked anyone. ...read more.

The public had been told in 1918 that they had fought "the war to end all wars" and thousands of memorials were erected across Britain in the 1920s to commemorate the losses of the Great War still fresh in the public's memory. Politicians could not possibly advocate a policy which would cause the children of the soldiers of the Great War to be sent to another war. Also by the 1930s people knew "the bomber will always get through". In the cinemas newsreels showed Spanish cities wrecked by bombing. For the first time British cities would be in the front line of enemy attack and people were terrified. Pacifism is a fear of war and a desire to avoid conflict at any cost. In the 1930s anti-war movements in Britain were growing and by 1936 support for pacifism was at its height. ...read more.

Its government had been brought down in 1934 and no short-term leader would want to commit France to any warlike conflict with Germany. Concern over the Empire Defence of the Empire was Britain's number one concern. The British Empire was huge, one quarter of the world's population lived under British rule and the British army was already overstretched. In the Great War troops from around the world had fought for Britain, but what relevance was a European war to Australia, New Zealand and South Africa? Would they do the same again? Fear of Communism The big political fear for Europe in the 1930s was communism. "Better Hitlerism than Communism" was a popular phrase at the time. What was the point of fighting Nazism if the result was the spread of Communism? In any case many people believed that Hitler had brought a strong and stable government to Germany. One of the main reasons Britain had failed to support the elected government of Spain during the Spanish Civil War was that it had communists in it. ...read more.