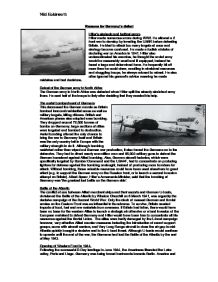 Reasons for Germany's defeat Hitler's strategic and tactical errors Hitler made numerous errors during WW2. He allowed a 2 front war to develop by invading the USSR before defeating Britain. He tried to attack too many targets at once and strategy became confused. He made a foolish mistake of declaring war on America in 1941. Hitler also underestimated his enemies, he thought the soviet army would be reasonably small and ill equipped; instead he faced a large and determined force. He frequently bit off more than he could chew, resulting in stretched resources and struggling troops, he always refused to retreat. He also often ignored his general's advice meaning he made mistakes and bad decisions. ...read more.

They had to divert nearly one million men and 55,000 artillery guns to defend the German homeland against Allied bombing. Also, German aircraft factories, which were specifically targeted by Bomber Command and the USAAF, had to concentrate on producing fighters for defense against the bombing onslaught, instead of producing more bombers for attack. Without bombing, those valuable resources could have been used elsewhere to great effect (e.g. to support the German army on the Russian front, or to launch a second invasion attempt on Britain). Albert Speer, Hitler's Armaments Minister, said that the bombing of Germany was 'the greatest lost battle on the German side'. Battle of the Atlantic The conflict at sea between Allied merchant ships and their escorts and German U-boats, christened the Battle of the Atlantic by Winston Churchill on 6 March 1941, was arguably the decisive campaign of the Second World War. ...read more.

Although U-boats would continue to operate until the end of the war, the Germans had lost the Battle of the Atlantic by the end of May 1943. Opening of Western Front in 1944. Following the successful D-Day landings in June 1944, the Americans liberated the Loire valley, Paris and Liege. Germany was being forced backwards towards Berlin. America and Britain had used the element of shock and surprise after the Normandy landings to drive the weakening Germans back. Superior resources of the allies. Throughout WW2 the allies had superior supplies to Germany, British planes were more modern and had better technology and the radar system was far more advanced, this gave Britain an advantage. The allies also had more organised leaders who were less power hungry and not over ambitious. Once the U.S.A joined the war, the allies had larger quantities of superior resources, including extra planes, ships and troops. Niki Holdsworth ...read more.