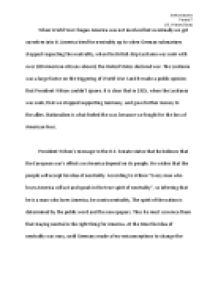 Reasons for the American entry into WW1

﻿Joshua Jacobs Period 7 U.S. History Essay When World War I began America was not involved but eventually we got ourselves into it. America tried for neutrality up to when German submarines stopped respecting the neutrality, when the British ship Lusitania was sunk with over 100 American citizens aboard, the United States declared war. The Lusitania was a large factor on the triggering of World War I and it made a public opinion that President Wilson couldn?t ignore. It is clear that in 1915, when the Lusitania was sunk, that we stopped supporting Germany, and gave further money to the allies. Nationalism is what fueled the war, because we fought for the loss of American lives. President Wilson?s message to the U.S. Senate states that he believes that the European war?s effects on America depend on its people. He wishes that the people will accept his idea of neutrality. ...read more.

We would have been too proud to send money to the shedders of American blood. We sent over 1,300 million dollars in exports after 1914. That alone shows the amount of patriotism we have. In a letter from United States Ambassador to Germany Gerard, it states that on May 7th, 1915 the British steam ship Lusitania was sunk killing over 100 Americans. They violated the American rights on the high seas. I am astonished that this didn?t lead to an immediate war. But regardless this fueled the public to push Wilson to go to war. The sinking of the ship can be compared to modern day?s 9/11. Though that took 2 years, so there were other obvious pushes. This angered the public to make a shift in their position of the entrance into the World War. Woodrow Wilson?s speech on January 22, 1917, came off as non-patriotic and unwilling to avenge the lives of the fallen Americans. ...read more.

Woodrow Wilson says in his speech to the senate ?Neutrality is no longer a feasible or desirable where the peace of the world is involved?? This illustrates that he is not willing to be civil to Germany anymore. He doesn?t desire any land, any dominion, he just wants peace. This shows how much of a peaceful man he was, not wanting anything apart from the war to be over. He believes he will get his share in the long run and from securing the world from war. He also speaks of freedom, and that the ?menace? is threatening it. The threat to peace and freedom is an organized force, controlled by Germany?s government, not the people. He believes that democracy must be saved. This changed America?s idea of the German government and how it is trying to take away peace and freedom. All of this together shows why America entered the war as they did. It also shows that nationalism was a large factor in World War I. This marked the beginning of World War one, and patriotism helped, along with other factors, start it. ...read more.