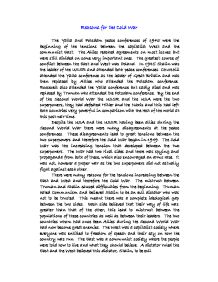 Reasons for the Cold War.

Reasons for the Cold War The Yalta and Potsdam peace conferences of 1945 were the beginning of the tensions between the capitalist West and the communist East. The Allies reached agreements on most issues but were still divided on some very important ones. The greatest source of conflict between the East and West was Poland. In 1945 Stalin was the leader of the USSR and attended both peace conferences. Churchill attended the Yalta conference as the leader of Great Britain and was then replaced by Attlee who attended the Potsdam conference. Roosevelt also attended the Yalta conference but sadly died and was replaced by Truman who attended the Potsdam conference. By the end of the Second World War the USSR and the USA were the two superpowers, they had defeated Hitler and the Nazis and this had left both countries very powerful in comparison with the rest of the world at this post war time. Despite the USA and the USSR having been allies during the Second World War there were many disagreements at the peace conferences. These disagreements lead to great tensions between the two superpowers and therefore the Cold War began in 1949. ...read more.

This meant that the USSR suddenly felt under great threat from the USA and they realised that they could not fight back if the atomic bomb was to be used against them. Truman had ordered for the atomic bomb to be dropped on the town of Hiroshima in Japan, Stalin was not told of this plan a although the countries were supposedly fighting side by side. Due to this the tensions became very powerful between the East and West. The USSR then began to expand throughout Europe, Stalin organised rigged elections in many countries and then ruled over them with communist law. Communism was hated by all and during the period when it was expanding throughout Europe the former Prime Minister of Great Britain made a very famous speech. In March 1946 Winston Churchill delivered his "Iron Curtain" speech at Fulton, Missouri. He declared that Europe had been divided in two by Soviet policy. Stalin accused Churchill of trying to stir up war with this speech and this therefore increased tensions even more. Truman felt he had to stop Stalin expanding communism and save the people of Europe from it. ...read more.

Stalin cut West Berlin off totally and left them with only basic food rations for six weeks. On 24th June all land routes to West Berlin were cut by the Soviet Union. Stalin wanted the Western Allies out of Berlin. The people of West Berlin had then to rely on the Berlin airlift for food, clothes and fuel. The electricity supply was cut in winter and 1,400 planes had to land in April alone to ensure all the people of West Berlin could live comfortably. In May Stalin called off the blockade as we realised the Western Allies were determined to keep West Berlin. The Cold War was brought about due to many reasons and they began as early as the peace conferences concerning the Second World War. The East and West could no longer stay allies after the war due to the extensive ideological gap. Two enormous superpowers that were once allies and depended on each other against the Nazis eventually got involved in the Cold War in 1949 due mainly to the mistrust over the atomic bomb, the Marshall plan and the Berlin blockade. Without their common enemy in Hitler mistrust quickly developed and resulted in the Cold War. By Kirsti Hanlon 11B ...read more.