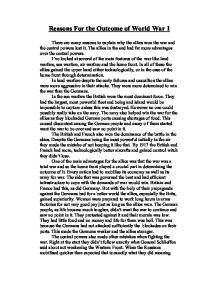 Reasons For the Outcome of World War 1.

Reasons For the Outcome of World War 1 There are many reasons to explain why the allies won the war and the central powers lost it. The allies in the end had far more advantages over the central powers. I've looked at several of the main features of the war like land warfare, sea warfare, air warfare and the home front. In all of these the allies gained the upper hand either technologically, or in the case of the home front through determination. In land warfare despite the early failures and casualties the allies were more aggressive in their attacks. They were more determined to win the war than the Germans. ...read more.

One of the main advantages for the allies was that the war was a total war and so the home front played a crucial part in determining the outcome of it. Every nation had to mobilise its economy as well as its army for war. The side that was governed the best and had efficient infrastructure to cope with the demands of war would win. Britain and France had this, as did Germany. But with the help of their propaganda against the Germans bad for a better world the allies, especially the Brits, gained superiority. Women were prepared to work long hours in arms factories for not very good pay just as long as the allies won. ...read more.

From then on the Germans were always up against it. As soon the French had support from the British who they had under estimated like the French. France had been expected to be in Germany's control within 6 months of the war starting. Another mistake by Germany was with its U-boat campaign. It was working well at first but when the American ships and civilians were attacked by the U-boats America entered the war on the ally's side. From my research I've seen that the British were extremely important in winning the war for the allies. They had good technology, an efficient army, a good air force, and excellent navy, and a determined home front that was well governed. The central powers though were not quite as efficient and made too many mistakes during the course of the war which led to their down fall. ...read more.