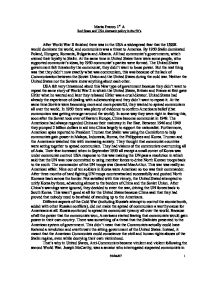 Red Scare and USA domestic policy in the 50&amp;acute;s.

Red Scare and USA domestic policy in the 50�s After World War II finished there was in the USA a widespread fear that the USSR would dominate the world, and communism was a threat to America. By 1950 Stalin dominated Poland, Hungary, Romania, Bulgaria and Albania. All had communist's governments, which owned their loyalty to Stalin. At the same time in United States there were some people, who supported communist's ideas, by 1950 communist's parties were formed. The United States government felt threaten by the communist, they didn't want to loose power. But the real thing was that they didn't now exactly what was communism, this was because of the lack of Communication between the Soviet Union and the United States during the cold war. Neither the United States nor the Soviets knew anything about each other. USA felt very threatened about this New type of government because they didn't want to repeat the same story of World War 2 in which the United States, Britain and France at first gave Hitler what he wanted and later they released Hitler was a cruel dictator. United States had already the experience of dealing with a dictatorship and they didn�t want to repeat it. ...read more.

His methods were wild charges, fake evidence, innuendo and lies, appeals to ignorance, prejudice, hatred fear"1 The people suspected of being communists, were blacklisted, making them unable to get jobs, insurance, and loans, among other things. Also anti-Communists startled Americans by leveling their defense by making it seem like all members of communist parties were murderers and terrorists, which is where the term Red Scare was generated from. USA government frightened Americans into believing that all communists and people from countries such as Russia, which had communist leadership, were evil. People who had communists ideas were persecuted , they were put in jail. The Red Scare nearly destroyed the Communist Party, driving away most of its members. Some of the Washington State leaders were imprisoned, others went underground. Truman Administration paralleled its foreign policy of containment overseas with a full-out anti-Communist crusade at home. Persons accused of being Communists could not cross-examine their accusers nor make their own statements. Moreover, the government also turned to professional anti-Communist witnesses who testified that: "Many of the accused were not active Party members. Some had been members but had left years before. A few may never have been Communists". ...read more.

They said the Democrats weren't doing anything about communism. They said communists were ruining the United States and that the democrats let them do it. Republicans accused Democrats of being very soft with communism. " Washington Republicans made anti-communism the central theme of their 1946 campaign, charging that Democrats had "sold their soul to the Communist Party.(...)The accusations that Democrats aided communism, combined with a mild post-war recession, led Republicans to sweep the elections, regaining controlled of the Washington state legislature for the first time in 16 years."3 In conclusion I would say the Red Scare wasn't justified at all, it was the way the republicans found to weakend Democrats. The Red Scare was not really a fight against communism, it was an internal fight of two strong political parties of the United States. "Thanks primarily to McCarthy, most Americans identify the anti-Communist investigations and hearings of the late 1940s and early 1950s as a shameful episode in American life during which a non-existent communist threat was used to pillory innocent people for their political beliefs. The McCarthy era is routinely portrayed in textbooks as an age of hysteria."4 1 Morrison and Commager s History of the American Republic, 1970. 2 Senator Joseph McCarthy, Speech at Wheelin, West Virginia. 3 Michael Reese ,http://www.washington.edu/uwired/outreach/cspn/curcan/main.html#time 4 http://www.cnn.com/SPECIALS/cold.war/episodes/06/then. ...read more.