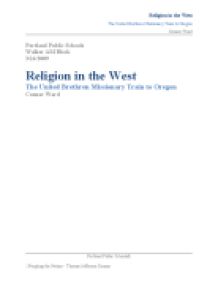 Religion in the West -The United Brethren Missionary Train to Oregon

﻿Religion in the West The United Brethren Missionary Train to Oregon Connor Ward ________________ Portland Public Schools Walker AM Block 3/16/2009 Religion in the West The United Brethren Missionary Train to Oregon Connor Ward ________________ Author?s Page While researching Thomas Jefferson Connor I have learned a lot about farther back on my mother?s side of the family. I knew quite a bit about my grandparents but nothing about their parents or the generations before them. I always knew that we originally came from the Midwest and that my grandmother was the only one we knew about that came out in recent memory. Whenever we would drive to the coast to visit her we would drive by Philomath College and I would get the one-minute story of Thomas Jefferson Connor except nobody knew his name of the top off their head. It went something like this, ?You know, one of your ancestors started that college?, and that was all I knew about it. Because I was a Beaver fan I knew that Oregon State University issued its first degree in 1870 and the mid-1800?s was about the time Philomath College opened. Naturally, I wanted to find out more about the Philomath College?s history so I e-mailed the Benton Historical Society (located in the old Philomath College building) and looked up a bunch of information about the time and Thomas Jefferson Connor. I learned Thomas Jefferson Connor was a very important person as well as a Reverend and in addition to starting Philomath College, he owned the first general store in the entire mid-Willamette valley. ...read more.

I think that racism is a very lopsided way to see the world. One kind of skin being ?better? than the other is just wrong. We are all people and being from one part of the world does not mean you are better or worse. On the second leg of the journey, they were on the wagon train headed to Oregon. Being a religious train, a question was raised about whether or not to travel on the Sabbath. The train was running behind schedule, a vote was held, and the majority decided to travel so as not to miss the deadline for the land grant.[8] Though Reverend Connor wanted to follow his principles, he was also a practical man and allowed the company to continue. Reverend Connor also made very smart decisions about what should happen. One example of this is in the near miss of an Indian attack on June 15, 1853. Our company was thrown into quite a panic this morning, when about 6 miles from the fort we were stopped by an Indian trader and informed that hostilities had commenced between the Missouri Sioux Indians and the soldiers of the fort, that they had come to an engagement the day before which resulted in the death of 9 whites and 6 Indians. Our company with others called a council to determine what should be done. Wilst we were yet consulting, a messenger arrived and informed us that the Indians were collected to the no. ...read more.

A sea grant, space grant and sun grant designations came later, making Oregon State University one of only two universities in the nation to hold all four titles.[16] I would like to go to Oregon State University not only because my parents went there along with most of my immediate family, but because my family and I have many ties to Benton County and because Oregon State University offers very good engineering and technical design courses. Thomas Jefferson Connor, in addition to opening Philomath College also owned the first general merchandise store in the mid-Willamette Valley. He purchased the 88th block of town on August 25, 1869 for $200 from George Hinkle. It was located at what is now the Northwest intersection of 13th and Main. The deed states that “no theater, grog shop, tippling house, gambling saloon, spirituous or malt liquor vending establishment of any kind”[17] be allowed. On this site, though not the original building, stands the CD&J Café. I have had lunch there and I can vouch it has some of the best bacon I have ever tasted. The Mt. Union Cemetery, land donated by Shipley, is the final resting place of Hannah Phoebe (Borden) Connor who died on January 8, 1873 because of unknown causes. She was 55 years old. Her gravestone is one of the first you see as you enter Mt. Union Cemetery. Reverend Thomas Jefferson Connor is also said to be buried there. He, among other abolitionists of his time are laying in Mt. Union Cemetery and mark a time of one of the greatest growth periods in Oregon. ...read more.