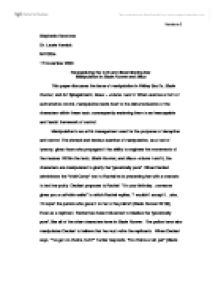 Reorganizing the truth and disseminating lies: Manipulation in Blade Runner and Maus.

Stephanie Vanstone Dr. Laurie Harnick MIT025a 17 November 2003 Reorganizing the truth and disseminating lies: Manipulation in Blade Runner and Maus This paper discusses the issue of manipulation in Ridley Scott's, Blade Runner, and Art Spiegelman's, Maus - volume I and II. When used as a form of authoritative control, manipulation lends itself to the dehumanization of the characters within these texts; consequently enslaving them to an inescapable and fascist framework of control. Manipulation is an artful management used for the purposes of deception and control. The shrewd and devious exertion of manipulation, as a tool of tyranny, gives those who propagate it the ability to engineer the movements of the masses. Within the texts, Blade Runner, and Maus- volume I and II, the characters are manipulated to glorify the "genetically pure". When Deckert administers the "Void-Comp" test to Rachel he is presenting her with a scenario to test her purity. Deckert proposes to Rachel "It's your birthday...someone gives you a calf-skin wallet" to which Rachel replies, "I wouldn't accept it...also, I'd report the person who gave it to me to the police" (Blade Runner 22:38). ...read more.

After all, "this is not execution; it's retirement" (Blade Runner 3:10). In this sense, Deckert and the replicants are engaged in a perpetual struggle of being predator or being prey. Batty exemplifies this struggle when he howls like a wolf while in pursuit of Deckert (Blade Runner 1:38:04). When Priss says, "but we're stupid and we'll die" in response to Batty's plans of paradigmatic change, it becomes obvious that the way the replicants are treated has changed the way in which they view themselves. The replicants have been reduced to animals. Similarly, in Maus, the Nazis see the Jews not as humans but as animals. Spiegelman draws the Jews as mice in his graphic novel to conceptualize this fact. Vladek describes how the Jews were transported in cattle cars. "It was such a train for horses, for cows. They pushed until there was no room left. We lay one on top of the other, like matches, like herrings" (Spiegelman 2:54). This treatment was a form of manipulation attempting to change the way in which the Jews viewed themselves. ...read more.

In Maus, the dehumanization of his father has enslaved Artie to Vladek's past. When Artie thinks of his parent's history he is doomed to envision a pile of dead Jews under his desk (Spiegelman 2:41). Artie is unable to escape the terror of Auschwitz. This becomes clear on page 47 of Maus II, when Artie puts on the mask of a mouse. Artie signifies himself as the "child of a survivor" and, despite the fact that he has never been there, Auschwitz will manipulate the way in which Artie lives forever. Artie has absorbed his father's past to such an extent that he has begun to lose some of himself and adopt some of his father. Artie bleeds history, as the title of Spiegelman's book suggests. Ridley Scott's, Blade Runner, and Art Spiegelman's, Maus - volume I and II, cooperate to reveal the effects of manipulation when it is used to formulate authoritative control. The propagation of misinformation dehumanizes the characters within these texts, making them slaves to a system that is created by manipulation and sustained by surveillance. ...read more.