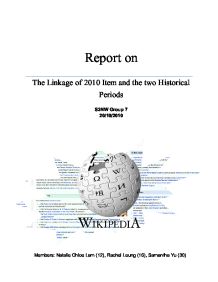 The invention of Encyclopedia Britannica has inspired the Wikipedia and influences it become one of the largest reference website. 2.3. Renaissance and Enlightenment In Renaissance, people really try to present a neutral point of view of the subjects. And similar in the Enlightenment, people tired to collect information about things human know and published books with reliable source. Both Renaissance and Enlightenment bought out the idea of Wikipedia, about sharing thoughts and representing people's point of view. 3. Wikipedia in Renaissance and Enlightenment 3.1. Renaissance In the Renaissance, although the worldwide web hasn't invented, but the printing was invented by Johannes Gutenberg, he is best known for the Gutenberg press, which is an innovative printing press machine that used movable type. In 1423 the first printed books were made in Europe. The way of printing quickly improved so that large books like the Bible could be made and sold cheaply. The printers then began to print everything that they thought was interesting:- Ancient Greek and Roman writings, poetry, plays, lives of the saints, mathematics textbooks, medical textbooks, Christian stories, naughty stories, books about animals and monsters, advice to princes as to how to rule their people and maps of the world. Fig 3.1. Renaissance map This is a map of the Renaissance, Germany is what we call holy roman empire in the past. We can see that it is near the North Sea and a very convenient place for trading and business. The geography helped the invention of printing to spread around the Europe and more people could use the new technology. Printing things was cheaper and faster, people mostly printed books, not just rich and clever people could read and there were more people could learnt to read and write. 3.2. Enlightenment The Enlightenment was different from its earlier movement, the Renaissance. Renaissance figures helped the rise of arts by using religion (such as the Reformation). ...read more.

5.4. Intellectual In the Renaissance, the educational assumption of the 15th and 16th centuries weighs in on the side of upper classes, leadership roles should be in the hands of the best. This period of time focused on religious studies and only the basics (reading, writing and math). During the Renaissance the printing press was developed by Johannes Gutenberg This invention has a great influent on us. Now the United States has made more advancements to the original printing press and produces a mass production of printed books, papers, magazines and flyers. There are also the Intellectual rights to protect things that people published and there's copyright. But there are some people do not care and copy information to the websites. 5. Conclusion History is very important for us, we learn from history and improve our life. We absorb knowledge from the history in order not to make the same mistake. From our history, some of the cultures were changed and replaced due to the now-a-days technology was improved. People invented things that can replace the purpose, and so the old invention is useless and will not be used anymore. Such as we don't only use books for searching information but we use computer most of the time. The information in books were typed and put into website for people to search online. The trend of searching information using computer is taking over the trend for reading information from books. There were also some things that were kept from our history and maintain unchanged over time, they might be improved but not replaced. Since they were considered as "useful" to the society, so they can continue their existence and be used by us. Such as the Christmas and New Year were never affected or disappear from the history since it started, because it is festivals that strongly related to the religion that affected many people. Also, ships were a very ancient transportation, but it was still used now, and like cars, they were improved in the past centuries and many new functions were added to them. 6. ...read more.