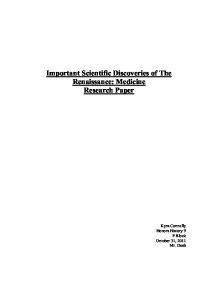 Research Paper; The Important Scientific Discoveries of the Renaissance: Medicine

Important Scientific Discoveries of The Renaissance: Medicine Research Paper Kyra Connelly Honors History 9 F Block October 31, 2011 Mr. Deeb Life without medicine does not even seem possible, but the medical knowledge society has today must come from somewhere. It must have begun at a time when ideas were being put to good use, and everyone believed them. The time period ranging from 1350-1550 marked the span of the Renaissance ("re-birth"). It was during this time in Europe that cities that had just recovered from the Black Plague were starting to re-build and gain strength in their country again. In addition to this, there was a major progress of medical knowledge and renewed interest in the ancient ideas of the Europeans before them. This was made possible by technological advances, accidental discoveries, and continued learning. The entirety of medical development didn't make a drastic change in Europe right away, but the effects that could be felt later started with a few basic conceptions in the beginning; from the time before the Renaissance to the processes scientists discovered that had a big impact on the advancements we have today. Medicine's distinctive ideas and most important written sources of authoritative teaching did not originate in western Europe but were drawn from Greek antiquity and the world of Islam. ...read more.

Francesca Romana reveals something of the attitude of a deeply religious person in the fifteenth century to the use of medicine. As she grew older, she developed a passionate concern for the poor and especially the sick. As a result, although she at first wanted to use all use of the medicine for herself, she expanded her energies in giving it to others, and she devoted thought to giving the right kind of medicine for each case. She herself practiced healing, usually by prayer and touch alone but sometimes by also employing ointments or liquids.xiv Albertus Magnus worked on animals to study the process of treating the human anatomy, and he achieved his knowledge from the passages of anatomical descriptions in philosophical works. Medical authors like him repeatedly said that the characteristic of medical understanding of the body was an ultimately practical idea. Physiological theory provided a general conceptual basis for explanations of illness and prescriptions for treatment. Both were, for example, taken away from the theory of temperament of the role played by the balance of the elementary qualities of hot, wet, cold, and dry in the body. Readers of his work encountered the idea that study of anatomy would enable the physician to identify diseases in the hidden internal organs of living patients.xv Gentile da Foligno studied the flexibility and sense experience and expressed dissatisfaction with the claim of "all the masters" that the separate complexions matched to the various parts of the body could be differentiated by touch. ...read more.

The bark of the Quina tree contained an ingredient called quinine which is still used in the treatment of malaria. The leaves of the tobacco plant were thought to have medicinal properties, and laudanum, an opium-based painkiller, was used for many disorders.xxiv Cauterizing, on the other hand, was discovered to stop the bleeding of a wound by burning it with red-hot metal.xxv The theory of the Four Humors was a different discovery, and it explained why people became ill. Finding out how blood is pumped through the body was helped by William Harvey, who taught that it was the heart doing the work and pumping blood through our veins.xxvi Herb remedies were mostly experimented with by women who specialized in medical treatments. Some herbs and minerals cured illnesses, such as mercury and rye.xxvii Medicine and its practitioners are part of the history of education, of occupations and the emergence of professions, and how people manage health and disease. And attitudes, beliefs, and doctrines in medicine may show cultural assumptions about the human body, illness and wellness, and the characteristics and relations of the sexes, and the stages of human life from infancy to old age. This is why it is important to reflect on the information we can learn from those in our past, such as everything during the time of the Renaissance, so now, in the present, we can take what we learn to achieve even more. ...read more.