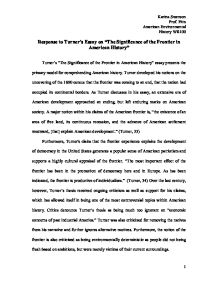 Response to Turner's Essay on

Karina Swenson Prof. Fitts American Environmental History WR100 Response to Turner's Essay on "The Significance of the Frontier in American History" Turner's "The Significance of the Frontier in American History" essay presents the primary model for comprehending American history. Turner developed his notions on the uncovering of the 1890 census that the frontier was coming to an end, that the nation had occupied its continental borders. As Turner discusses in his essay, an extensive era of American development approached an ending, but left enduring marks on American society. A major notion within his claims of the American frontier is, "the existence of an area of free land, its continuous recession, and the advance of American settlement westward, [that] explain American development." ...read more.

As has been indicated, the frontier is productive of individualism." (Turner, 34) Over the last century, however, Turner's thesis received ongoing criticism as well as support for his claims, which has allowed itself in being one of the most controversial topics within American history. Critics denounce Turner's thesis as being much too ignorant on "economic concerns of past industrial America." Turner was also criticized for removing the natives from his narrative and further ignores alternative motives. Furthermore, the notion of the frontier is also criticized as being environmentally deterministic as people did not being fresh based on ambitions, but were merely victims of their current surroundings. ...read more.

as profound flaws within his claims, nevertheless, his thesis remains extremely influential within American society and culture as it is highly relevant when it is approached as a representation of today's America. "The frontier [as] the line of most rapid and effective Americanization." (Turner 33) is applicable to current American civilization where democracy and individualism is a fundamental and profound aspect of American society. Today, the individual is still emphasized, "it is his importance that has been magnified" (Webb, 54) Thus, using both arguments of Turner's critics and supporters, one should acknowledge the general premise behind Turner's theories, and rather than accepting or rejecting it, become interested his hypothesis and apply them to our current America. ...read more.