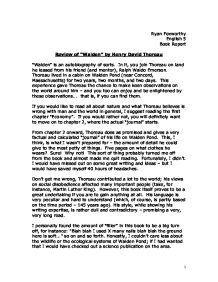 Ryan Foxworthy English 5 Book Report Review of "Walden" by Henry David Thoreau "Walden" is an autobiography of sorts. In it, you join Thoreau on land he leased from his friend (and mentor), Ralph Waldo Emerson. Thoreau lived in a cabin on Walden Pond (near Concord, Massachusetts) for two years, two months, and two days. This experience gave Thoreau the chance to make keen observations on the world around him - and you too can enjoy and be enlightened by these observations... that is, if you can find them. If you would like to read all about nature and what Thoreau believes is wrong with man and the world in general, I suggest reading the first chapter "Economy". If you would rather not, you will definitely want to move on to chapter 2, where the actual "journal" starts. From chapter 2 onward, Thoreau does as promised and gives a very factual and calculated "journal" of his life on Walden Pond. This, I think, is what I wasn't prepared for - the amount of detail he could give to the most petty of things. Five pages on what clothes he wears? ...read more.

(p. 9) "I had three pieces of limestone on my desk, but I was terrified to find that they required to be dusted daily, when the furniture of my mind was all undusted still, and threw them out the window in disgust." (p. 33) "men have become the tools of their tools." (p. 34) "[Students] should not play life, or study it merely, while the community supports them at this expensive game, but earnestly live it from beginning to end." (p. 54) "Many are concerned about the monuments of the West and the East,--to know who built them. For my part, I should like to know who in those days did not build them,--who were above such trifling." (p. 54) "...my greatest skill has been to want but little..." (p. 64) "...to maintain one's self on this earth is not a hardship but a pastime, if we will live simply and wisely;" (p. 66) "I would not have any one adopt my mode of living on any account; for, before he has fairly learned it I may have found out another for myself, I desire that there may be as many different persons in the world as possible; but I would have each one be very careful to find out and pursue his own way, and not his father's or his mother's or his neighbor's instead." ...read more.

Few people were interested in purchasing his book, so he spent the next nine years writing and Walden before trying to publish it. He supported himself by surveying and making a few lectures, often on his experience at Walden Pond. He traveled often, to the Maine woods and to Cape Cod several times, and was particularly interested in the frontier and Indians. He opposed the government for waging the Mexican war (to extend slavery) eloquently in "Resistance to Civil Government," based on his brief experience in jail; he even supported John Brown's violent effort to end slavery. Thoreau died of tuberculosis in 1862, at the age of 45. His last words were "Moose" and "Indian." Not only did he leave his two books and numerous essays, but he also left a huge Journal, published later in 20 volumes, which may have been his major work-in-progress. Walden Pond This is the survey of Walden Pond that Henry David Thoreau did himself in 1846. A rod refers to either an area of 30.25 square yards or a length of 16.5 feet. Thoreau determined that Walden Pond was 175.5 rods long, which is 0.55 miles. Photographs of Walden Pond - Past... ...and present. ?? ?? ?? ?? 1 ...read more.