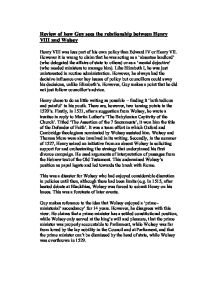 Review of how Guy sees the relationship between Henry VIII and Wolsey Henry VIII was less part of his own policy than Edward IV or Henry VII. However it is wrong to claim that he was acting as a 'absentee landlord' (who delegated the affairs of state to others) or as a 'mental dejective' (who needed ministers to manage him). Like Elizabeth I, he was just uninterested in routine administration. However, he always had the decisive influence over key issues of policy but councillors could sway his decisions, unlike Elizabeth's. However, Guy makes a point that he did not just follow councillor's advice. Henry chose to do as little writing as possible - finding it 'both tedious and painful' in his youth. There are, however, two turning points in the 1520's. Firstly, in 1521, after a suggestion from Wolsey, he wrote a treatise in reply to Martin Luther's 'The Babylonian Captivity of the Church'. Titled 'The Assertion of the 7 Sacraments', it won him the title of the Defender of Faith'. ...read more.

the Council and at Parliament, and that the prime minister can't be dismissed by the head of state, while Wolsey was overthrown in 1529. He also claims that the Prime Minister was a public official. This suggests that that he was the public servant of the state with a duty to set the public interest - an argument cast in fictional terms in Book 1of More's Utopia. Under Henry VIII, a minister was personal servant. Wolsey was the king's peeminent councillor; but he held this position as a royal servant. Guy also makes reference to 'revisionist' scholarship which states: that Wolsey arrogated power to himself in the Council (ruling the roost in the Star Chamber and depriving the king of attendant councillors at court), he showed Tudor Government at it's most ambitious and least effective (for example, he repeatedly began things that he was unable to finish) and he thought that all opinions, except Henry VIII's, were irrelevant. If Wolsey was the king's loyal 'servant' and merely following instructions it would explain things such as his foreign policy. ...read more.

Until the summer of 1527, Wolsey controlled most of the domestic policy. In foreign affairs, Henry had responsibility for the broard outline but more than mere details were left for Wolsey. Wolsey shared the same principle as Henry on conquests in northern France but expressed reservations.They rarely disagreed. Guy claims that to credit their successes largely to Wolsey's leadership and to blame their failures on Henry is too 'schematic'. Until 1527,Henry saw Wolsey as a friend and partner and spent a lot of time with him (especially at the start of their friendship). The sticking point with the nobility was that of Wolsey's close relationship with the king. Guy claims that Wolsey was attacked for many abuses of power but the charges were symptons of the cause, not the cause itself. He claims that it was less Wolsey's actual decisions but the fact that he was Henry VIII's partner. Political opponents were jealous of this privelage. Guy claims that he broke the mould of conciliar government and this was his main offence. ...read more.