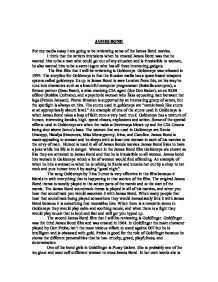 Reviewing some of the James Bond movies.

JAMES BOND For my media essay I am going to be reviewing some of the James Bond movies. I think that the writers intensions when he created James Bond was that he wanted him to be a man who could get out of any situation and is irresistible to women, he also wanted him to be a secret agent who has all these interesting gadgets. The first film that I will be reviewing is Goldeneye. Goldeneye was released in 1995. The storyline for Goldeneye is that the Russian mafia has a space based weapons system called goldeneye. Its up to James Bond to save London from this, on his way he runs into characters such as a beautiful computer programmer (Izabella scorupco), a former partner (Sean Bean), a wise cracking CIA agent (Joe Don Baker), an ex KGB officer (Robbie Coltrane), and a psychotic woman who likes squeezing men between her legs (Femke Janssen). ...read more.

The original James Bond theme is mostly played in the action parts of the movie and at the start of the movie. The James Bond soundtrack theme is played in all of his movies, and when you hear that soundtrack you would associate it with James Bond. When many people that hear that soundtrack being played somewhere they would immediately link it with James Bond because it is something that resembles him. When there is a romantic scene in Goldeneye they would play calm and soothing music, and when there is a fight they would play music that is loud and fast and will get you hyped up. The second James Bond film that I will be reviewing is Goldfinger. Goldfinger was the third James Bond film and was created in 1964. In Goldfinger the main character played by Gert Frobe, isn't the most vicious villain to stand against 007 but he is intelligent and is obsessed with gold. ...read more.