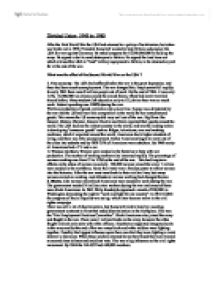 Divided Union 1945 to 1980 After the First World War the USA had returned to a policy of isolationism, but when war broke out in 1939, President Roosevelt wanted to help Britain and prepare the USA for war against Germany. He asked congress for $1,300,000,000 to build up the army. He signed a deal to send destroyers to Britain. He signed the lend lease act which allowed the USA to "lend" military equipment to Britain, to be returned or paid for at the end of the war. What was the effect of the Second World War on the USA ? 1. The economy. The USA had suffered before the war in the great depression, and there had been much unemployment. The war changed this. Employment fell rapidly. In early 1941 there were 8 million people out of work. By the end of 1944 it was only 1.4%. 16,000,000 Us citizens joined the armed forces. Many had never travelled abroad before. Many students left education early to fill jobs as there was so much work. Federal spending rose 1000% during the war. Wartime production of goods carried on into peace time. Europe was devastated by the war and the US had very little competition in the world for her manufactured goods. This means the US economy did very well out of the war. Big firms like General Motors, Chrysler, General Electric and Ford, exported their goods around the world. The USA became the richest country in the world, and was the leading nation in developing "consumer goods" such as fridges, televisions, cars and washing machines, which it exported around the world. Americans had a higher standard of living, and there was little unemployment. Richer Americans began to move out of the cities into suburbs and by 1959 25% of Americans were suburban. By 1960 nearly all Americans had a TV and a car. 2. ...read more.

Some rejected the idea of integration and wanted a separate black society. This was known as Black Separatism. Among these were Malcolm X, who was a follower of the Nation of Islam, and Stokely Carmichael. Malcolm X believed that the civil rights movement held back black people, and wanted a separate black nation, by force if necessary. He was killed in 1965. Stokely Carmichael was a student who was elected to lead the SNCC in 1966. He proposed his ideas of "Black Power" that non-violence was not working at that blacks needed to seize power to improve their status in society, by violence if necessary. He wanted a separate black state. Another group formed at this time were the "Black Panthers" a political party and also a secret terrorist organisation with about 2000 members. They wanted to arm the blacks of America and force the government to give them equal rights. This more violent approach had an effect on the civil rights movement. There were riots in big American cities from 1965 to 1967. Many of the rioters were simply expressing their frustration at the slow pace of change and the treatment they still received from the almost completely white police force. Most cities were divided into "Ghettos" where the blacks lived, which had the poorest housing and environment. However some rioters were influenced by the violent speeches of Malcolm X and Carmichael. There were riots in Watts in LA in 1965 with 30,000 rioters, resulting in 34 deaths. There were also riots in Chicago, Philadelphia, Cleveland and new York. 1967 saw rioting in 150 cities the worst being Detroit in 1967. It looked like a civil war was breaking out in America. A study in 1968 said that the main cause of the riots was black frustration at their continuing situation. When king was assassinate din 1968, fresh violence broke out. The final Civil Rights Act of 1968 banned discrimination in housing. ...read more.

It also emerged that Nixon had a slush fund of millions of dollars in a white house safe, and that they had drawn up an "enemies list" of people they wanted to be damaged. Nixon's role in ordering an illegal cover-up came to light in the press. Nixon had evaded taxes, accepted illegal money, ordered secret bombings, and harassed opponents using the FBI, buggings, and break-ins. When the senate began an investigation they learned that the President had taped all of his conversations in the Whitehouse since 1971.These conversations were revealed and showed details of his complicity in the cover-up. They also revealed Nixon to be a foul mouthed racist who peppered his everyday speech with swearwords. Finally he had tried to bribe some of the "plumbers" to keep quiet. He paid them $460,000 each. In light of his loss of political support and the near certainty of being convicted and possibly jailed, he resigned in August 1974, after addressing the nation on television the previous evening. What were the effects of the Watergate scandal. It was one of a sereis of revelations about the US presidents that had hit Americans hard. The truth about Kennedy's affairs were already beginning to come out, and Nixon's own Vice President, Spiro Agnew, had been forced to resign for tax evasion. Thirty one of Nixon's staff and advisors went to jail as a result of the investigations Congress acted to reduce the power of the president. In future he would have to consult Congress before sending US troops into action, and top using federal Money for personal reasons. They also set a limit on contributions to presidential campaign funds and allowed private citizens to see any files the government held on them. The long term result was a decline in respect for and trust in politicians. Gerald Ford, Nixon's Vice president, was defeated at the election on 1976 and Jimmy Carter was elected as a new face, untainted by association with the old regime. ...read more.