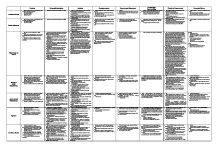 Gentry had benefited from sale of crown lands. Lack of care for tenants, break down of chain of being? * Body murdered on enforcing new religious changes. * New prayer book used/introduced, sparks rebellion. * Dependant on prot gentry, Arundell persuaded to lead. Need gentry leaders. * Articles drawn up --> but by clergy. * JP's powerless. * Carew fails to negotiate, sets fire to rebel's barns, heightening rebels distrust of gentry. * Laid siege to Exeter, town resists. * Lord Russell fails to gather support, requires Lord Grey + mercenaries. * Rebels re-establish in Sampford Courtenay, lacked organisation. * Rebellion put down. * Government looks to make an example * Ringleaders executed, priest hung from church tower, but --> * Commoners mainly pardoned. Upper classes fear possible further reaction. * Sent catholic Lord Russell. Failed to gather support, forced to * Dispatch Lord Grey with 300 Italian mercenaries. * Feared further rebellion, given nature of 1549. * Ringleaders executed, made and example of. * Clergy assume a leadership role and hijack demands of rebels. As only literate members of the population, particularly at this section of the Chain of Being, can pool the wool over the poor exploited rebels eyes. * No * Was a social/economic rebellion by the lower orders, removed from centre of power by both class * And location. Was a long way from London - * And a stationary regionalised uprising at that. * Attracted relatively few supporters. * However - Russell failed to gather significant force to oppose them. * JP's were not willing to stop rebellion. * Were many such rebellion up and down the country in 1549. * Could also be seen as a fundamental break down of Chain of Being - Guy --> 'Class War' * In terms of its aims, no. * Was hijacked by literate clergy, and even then failed to change religion. ...read more.

* Wander about up North. Fails to gather forces a bit further south. Rebellion splits when people aren't paid and leave. * On hearing of nearby royal army, Earls disband infantry and flee. N gets to Scotland, W to Netherlands. * E orders execution of 700, 450 actually killed. * N handed over in 1572 and executed. W gets away. * Earls loose all status as lands handed over to Crown. * (Papal Bull of 1570, to create opposition to E. Intended to be released during rebellion, not after) * R forced to muster royal army after S fails to put down the rebellion. * E declares martial law and authorises death of 700 rebels. Lenient in only max 450 actually kissed. * Crown repossesses rebels lands. * No changes to govt. policy. * Northumberland --> No longer lieutenant general of north, not allowed custody of M QofS. Both he and Westmoreland are prominent Catholics. * N + W both suffer loss of status and of wealth, W being known to ask for money. * Norfolk --> trad. Catholic family, famous courtiers. * Sussex --> torn. Friend of Norfolk's but aware of duties to Queen, role on Council of the North. * Force of 3000 is large but does not pose significant threat. * Foreign support did not actually exist, Philip unlikely to support M QofS - a Guise. * Threat regionalised. Could not even gather support from Lancashire. * Were a long distance from London, centre of power and M QofS, focus, who E moved to Tutbury --> reduces threat. * E had reduced autonomy of area --> reduces threat. * Papal Bull not issued during rebellion. * Did warrant repoonse --> may have been perceived as threat by Queen, if only to her image. * Failure * Does not gather a great deal of support. * Doesn't achieve objective of replacing E with M QofS. * Brings about no changes of religious policy. * Lost all their lands and privileges, worsened own situation. ...read more.