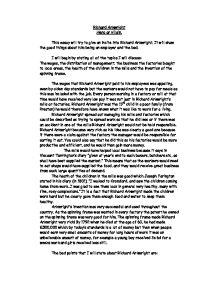 Richard Arkwright Hero or villain. This essay will try to give an incite into Richard Arkwright. It will show the good things about him being an employer and the bad. I will begin by stating all of the topics I will discuss: The wages, the distribution of management; the business the factories bought to local areas, the health of the children in the mills and the invention of the spinning frame. The wages that Richard Arkwright paid to his employees was appalling, even by olden day standards but the workers would not have to pay for meals as this was included with the job. Every person working in a factory or mill at that time would have received very low pay it was not just in Richard Arkwright's mills or factories. Richard Arkwright was the 13th child in a poor family (from Preston) he would therefore have known what it was like to work for a living. Richard Arkwright spread out managing his mills and factories which could be described as trying to spread work so that he did less or if there was an accident in one of the mills Richard Arkwright would not be held responsible. ...read more.

It is a fact that Richard Arkwright made the children work hard but he clearly gave them enough food and water to keep them healthy. Arkwright's invention was very successful and used throughout the country. As the spinning frame was wanted in every factory the patent he owned on the spinning frame was very good for him. The spinning frame made Richard Arkwright very rich! By 1792 when he died at the age of 60, he had made �500,000 which by today's standards is a lot of money but then when people would earn very small amounts of money for long hours of work it was an unbelievable amount of money, for example a young boy received 3s 6d for a weeks work and girls received less still. The bad points that I will state about Richard Arkwright are: The bad safety of the mills and the factories, the long hours, and the bad pay. The mills had very few safety precautions and many people died or had their limbs ripped off from being caught in the spinning frames. ...read more.

Joseph Farington stated that "a boy of 10 or 11 years of age told me his wages were 3s 6d a week - and a little girl told me her wages were 2s 3d a week" The children worked from Monday- Saturday and they attended school on Sunday to receive an education. As the children only attended school one day a week they did not get a good education so there was very little chance of them being able to get a good job to support their family and would grow up with themselves and their whole family's working in the factories or mills. Therefore their children would work in them also as the money would not be there to let them get a proper education without working, the wages paid were not large enough for them not to work. Conclusion Richard Arkwright was neither a hero nor a villain; he was a man trying to make a living in the best way that he knew how. Although some of his methods I disagree with they are not different to other people who owned mills or large establishments at that time. Therefore he is a businessman like many people are today. ...read more.

This is a well balanced exploration, with good reference to contemporary sources and fair points made. The ideas could be more explicitly linked back to the question and sources evaluated. 4 out of 5 stars.