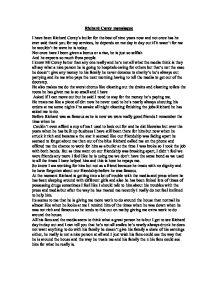 Richard Corey monologue I have been Richard Corey's butler for the best of nine years now and not once has he ever said thank you for my services, he depends on me day in day out if it wasn't for me he wouldn't be were he is today. Not once have I been given a bonus or a rise, he is just so selfish And he expects so much from people. I know Mr Corey better than any one really and he's not all what the media think is they all say what a nice person he is going to hospitals caring for others but that's not the case he doesn't give any money to his family he never donates to charity's he's always out partying and its me who pays the next morning having to tell the media to get out of the doorstep. ...read more.

the chance to work for him as a butler at the time I was broke so I took the job with both hands. But as time went on our friendship was breaking apart, I didn't feel we were friends any more I feel like he is using me we don't have the same bond as we used to all the times I have helped him and this is how he repays me. So know I am working for him but not as a friend because he treats with no dignity and he have forgotten about our friendship before he was famous. At the moment Richard is getting into a lot of trouble with the media and press where he has been sleeping around with different girls and also he has been linked lots of times of possessing drugs sometimes I feel like I should talk to him about his troubles with the press and media but after the way he has treated me recently I really do not feel inclined to help him. ...read more.

I feel after the long time I have served Richard Corey as a butler after the long time he has been treating me badly I feel like that I really do not what to work for him any more so one day I sat down and had a talk with Richard the way he acted toward me it seemed like he didn't really care about me resigning but I know deep down inside he really did and that he knew he was loosing his friend and college, but am sure with all money Richard has got after no time he would be able to find a knew butler and he would soon forget about me, but I feel I have made the right choice I just could not carry on working for him because now he is not my friend or my collegue. By Daniel Gee ...read more.