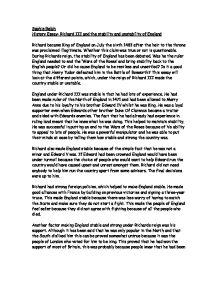 Richard III and the stability and unstability of England.

Sophie Relph History Essay- Richard III and the stability and unstability of England Richard became King of England on July the sixth 1483 after the heir to the throne was proclaimed illegitimate. Whether this claim was true or not is questionable. During Richards reign, the stability of England has been debated. Was he the ruler England needed to end the 'Wars of the Roses' and bring stability back to the English people? Or did he cause England to be restless and unsettled? Is it a good thing that Henry Tudor defeated him in the Battle of Bosworth? This essay will look at the different points, which, under the reign of Richard III made the country stable or unstable. England under Richard III was stable in that he had lots of experience. He had been made ruler of the North of England in 1471 and had been allowed to Marry Anne due to his loyalty to his brother Edward IV whilst he was King. ...read more.

This proved that he had won the support of most of Britain, this was probably because people knew that he had been a loyal supporter of his brother during his reign and most people had liked Edward IV. Buckingham's rebellion was dealt with effectively and discreetly to prevent publicity. If the rebellion had been made a bid deal of people might have started to doubt the capability of their ruler. Another reason why England was seen as stable during Richards's reign was that he managed to refrain from having any civil war during his time on throne. This was helpful because civil war caused death and if there had been the country would have been seen as unstable. England was quite free from fighting until the Battle of Bosworth began and the plots started taking place. However, Richard had done some stupid things, which lost him support and gained him many enemies. At the time enemies were bad to have because they could lead to him getting overthrown. ...read more.

People associated Richard with the Woodvilles and this made him unpopular and unstable. All the executions were another factor to Richards's instability. Executions were thought of as an excuse for getting rid of your opponents and this was seen to be an easy way out of it. The rebellions suggest that England under Richard III was unstable. The very fact that there were rebellions means that many people were unhappy with Richard and the way the country was being run. These influences would have unsettled people who mightn't otherwise question the way the country was being run. After explaining both sides of the argument the conclusion is that England was unstable under the rule of Richard III. Although he had popularity, he didn't have the loyal aristocratic support he needed to run the country. Some people thought he was the rightful king but many others doubted him due to the executions. The majority were just waiting for Henry Tudor to come along and side with them. He maintained the country as well as he could but nothing could stop his enemies plotting together to undermine his authority. ...read more.